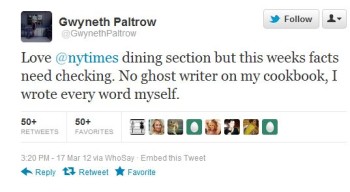 The article (see here) is written by Julia Moskin, who writes about her time working as a “cookbook ghostwriter.”  She bluntly writes that celebrity chefs “don’t” write their cookbooks.  Moskin suggested Wes Martin is Rachael Ray’s cookbook writer, identifying him as “a chef who has developed recipes for Ms. Ray and others” and adding that he know how to “write in the voices of chefs” and “channel them as cooks.”  Moskin also named Julia Turshen as “the ghostwriter for the ghostwriter on a book by Mario Batali” and a collaborator for Gwyneth Paltrow.

In response to the article, both Rachael Ray and Gwyneth Paltrow complained that the Times article was inaccurate and that they do write their own books.

Ray complained directly to Brisbane, saying that “I wrote all my books. I have them in handwritten and digital form. You tell me what part of that makes me not the writer,” Brisbane wrote.

Ray also tweeted March 20 that “a correction was in order” for the article. She added “In addition, I never offered @nytimes names of ‘other chefs’ who should have been included in the original piece”  and that “I also write my recipes alone.”

Ray told Eater.com that “In well over a decade of writing recipes for many cookbooks, television shows, and magazines, I have not now nor have I ever employed a ghost writer.”   She noted that she “clearly” indicates if she “does get the recipe from another source.”

She clarified concerning Martin, who she said is “friend who has done food styling, photography, and other assorted work for Ray over the years, but has not ghostwritten for her.”

And Paltrow tweeted March 17 that there was “no ghostwriter on my cookbook, I wrote every word myself.”  Paltrow called for the feature to have been fact checked.

However, despite those complaints, the Times defended its article.  Brisbane reported that Dining section editor Susan Edgerley said that the article “did not say someone else wrote Rachael Ray’s or Gwyneth Paltrow’s books. We said they, like many others, had help.”

She noted to Brisbane that the article considered ghostwriting to include the use of researchers.  The article said:

“Food ghostwriters come in many different flavors, including the researchers who might spend days testing ….”

In a March 19 follow-up post, Moskin wrote “Jamie Oliver, Rachael Ray, Gwyneth Paltrow and Mario Batali. All four have acknowledged, in print, working with collaborators on their books — but all objected to what they saw as the implication that they were not the authors of their own work.”

Times public editor Brisbane ultimately found the report “misleading” because “the Times…was using a stretched version of the term” ghostwriter.

iMediaEthics agrees.  Under that loose “definition” of ghostwriting, isn’t even Times public editor using a ghostwriter? After all, he has an assistant, who helps him with research for some of his public editor columns. We wrote to Brisbane asking about this.  He told us this week by e-mail: “I don’t think the definition of ghostwriter, as used in the article on celebrity chefs, is a reasonable definition of ghostwriter, and therein lay one of the flaws in the article. As for why it was used, I was not given an explanation other than the simple assertion that the editors involved in this particular story viewed ghostwriter as an appropriate term.”

Merriam-Webster’s definition, however, offers a more accurate reflection of what the public would expect the term ghostwrite to describe: “to write for and in the name of another.”

LinkBait? No Fact-Checking with Ray?

The Daily Beast suggested the Times‘ report was used to garner traffic, calling it “link bait for page views,” and noted that the Times “gave neither [Paltrow or Ray] the chance to respond.”  Eater.com added that Ray “said she was not contacted for fact-checking.” We also asked Times public editor Brisbane if he looked into this claim, but he didn’t respond to that question.

“As someone who has been in this business nearly 30 years and who has developed recipes for Every Day With Rachael Ray, I see this as a bit of a tempest in a tasting spoon.”

Further, the Daily Beast likened it to “wingnuts attacking President Obama for using a teleprompter when virtually every public speaker does. ”

Eater.com also created a section “Ghostwritinggate” where it features all its reports on the cookbook ghostwriting claims and responses.