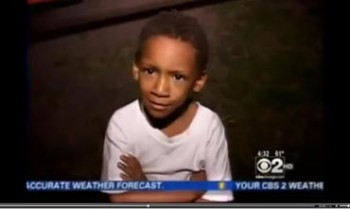 As iMediaEthics previously wrote, the Chicago CBS-affiliate WBBM apologized after taking a four-year-old boy’s comments on guns out of context.  In full, the boy responded to questions about crime in his neighborhood by explaining he would be a policeman and have a gun.  But the station just aired his comments about having a gun when he grows up.

Even though the video aired in June and the station apologized in July, the station recently commented on the video controversy, according to Media Bistro’s TV Spy.

The station’s news director Jeff Kiernan told the Maynard Institute, which criticized the station in July, that the station “has taken full responsibility” for the video “errors,” which he called “serious and subject to fair criticism.”

Kiernan claimed that the station acted on the video on its own initiative and “prior to any such external criticism.”

He continued to respond to racism charges against the station.

“However, we do object to subsequent reports in which we believe we have been falsely portrayed. Specifically, we take the strongest possible issue with being characterized as a news organization that doesn’t have African Americans in management and important decision-making roles.”

Kiernan added that the stations’ “news department” has “a significant number of experienced African American managers and journalists” and emphasized the station’s “commitment to diversity.”

In response, Bob Butler cited the National Association of Black Journalists’ Diversity Census, which found that “no African Americans are on the morning show, where the mistake was made” at WBBM.

“We accept responsibility for the mistakes that were made, both in the reporting and editing of the story. The video of the child should not have aired. As soon as news management identified the problem, they took immediate steps to ensure that the video would not air in subsequent newscasts. In addition, we have followed up with our employees to make sure that that we all have learned from the mistakes that were made.”

MediaBistro’s TV Spy reported in mid-August when Bobby Rush, a congressman in Illinois, looked into the WBBM report.

iMediaEthics wrote in May after WBBM criticized the Chicago company Walter E.Smithe Furniture & Design for airing comments from its staff in an advertisement.  The staff members had recorded “tributes” to former Chicago mayor Richard M. Daley during an April party hosted by the company.  The company later altered the advertisement to remove the WBBM employees’ comments.