No, a Florida teenager did not steal Burger King’s chicken nuggets after he quit his job at the fast food chain.

Several news sites, including four Tribune Media-owned news stations, failed to fact check and reported on 18-year-old John Correa’s tweeted claims that he quit Burger King and took a bag of chicken nuggets when he left. Correa had tweeted in late January  “Today was my last day working at Burger King so I took all their nuggets, f___ it.”

Only two outlets besides iMediaEthics contacted the teen to vet his claims — BuzzFeed and Florida’s WPLG. 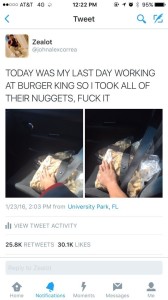 “The tweet has since become a viral sensation, with the Twitter post being retweeted over 23,000 times and featured on national television shows and websites,” according to Florida’s Local 10 News.

Correa told iMediaEthics over direct messages on Twitter that he didn’t expect the amount of attention he received. He said he wanted to show how quickly people will fall for anything they read on social media or in the news.

“National radio stations and large TV networks were broadcasting fake news stories, it was appalling to see how media reacts to get a story first,” he said to iMediaEthics, confirming that he has since deleted the tweet in question.

iMediaEthics contacted the Miami Burger King location that Correa told us he works for, but the manager directed us to corporate headquarters. We contacted Burger King’s public relations department to fact check Correa’s employment and story but the office declined to comment.

Mashable has added this update at the bottom of its story which called the teen “truly an idol to the masses” and “officially an inspiration to people everywhere.”

“Update: January 26, 2015, 5:45 p.m, It has been revealed that this Twitter user was not, in fact, stealing the chicken nuggets. He told News 96.5 that he had actually been asked to pick up some extra chicken nuggets from another store when he snapped the photos and tweeted about the supposed theft.”

UK Metro headlined its Jan. 26 story, “On his final day working at Burger King, this guy helped himself to all their chicken nuggets.” It has not corrected as of Feb. 2.

Elite Daily also hasn’t corrected as of Feb. 2. Its story was “Guy Does The Funniest Thing After His Last Day At Burger King, Because YOLO.”

Several Tribune Media-owned TV stations posted a story by Tribune Media about the alleged chicken nugget theft, including St. Louis station KPLR, FOX 31 Denver, and Oklahoma City KFOR
WGN Chicago has added an update to its story reading: “UPDATE: The following story has since been debunked as a hoax. Click here for more details.“

“The New York Times’ news app, NYT Now, even included a story about Correa from a local news station in its news roundup,” BuzzFeed added.

Who Wasn’t Hoaxed: BuzzFeed & Local Outlet WPLG Explain How They Avoided Being Duped

“BuzzFeed News constantly passes on stories that are trending online that are hard to verify, seem fishy or seem like something that is part of a marketing ploy. We use the same journalistic rigor that we’d apply to a political story on a presidential candidate to a story about a teen stealing chicken nuggets on his last day at Burger King.”

“I immediately became suspicious, because nothing down here is what it seems.” – WPLG’s Jeff Tavss

Tavss, the executive producer for digital at WPLG in South Florida, told iMediaEthics he knew something was off because in Florida, “nothing down here is what it seems.”

Tavss also oversees the station’s Special Projects unit which produces investigative news, “so that means I’m skeptical ALL… THE… TIME about everything,” Tavss told iMediaEthics. A sister station had sent a story about the chicken nugget thief to WPLG suggesting the station cover it.

“For stories like that, I’m not going to get ‘duped,'” Tavss told iMediaEthics. “When it’s so easy to find out the facts, there’s no reason to get the wool pulled over your eyes.  And learning the real story made it a better story in my opinion.”

Ordinarily, Tavss said he would have passed on the story but he decided to follow up since Correa was local. He said he contacted Correa through his website and “John was more than happy to talk and was excited to say that his ‘plan’ of outing the media’s poor habits had worked to perfection.”

That gave him the hook he was interested in to warrant coverage. Tavss said WPLG confirmed Correa’s version of events with his Burger King manager and interviewed Correa about his tweet.

“It wasn’t just a goofy high school kid pulling a prank, it was young adult (ugh, I sound like my grandmother) with some serious thoughts,” Tavss told iMediaEthics, lamenting that barely anyone took “that one simple step” to contact him.

“Ironically, someone from our sister station in Texas, the ones that sent us the original link, had written up their own story based blindly on the tweet… just like everyone else around the country,” Tavss told iMediaEthics. “They then shared it with the rest of the company.  Really depressing.  I told them to take it down immediately, which they did.”