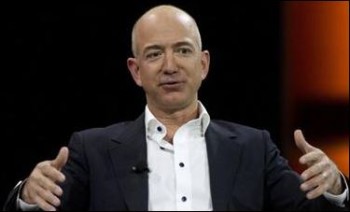 Xinhua is listed by Mondo Times as “the official news agency of the Chinese government.”

The satirical story, “Amazon Founder Says He Clicked on Washington Post by Mistake,” was written by Andy Borowitz for the New Yorker. The story claimed Bezos didn’t mean to buy the newspaper and only found out “when he saw an unusual charge for two hundred and fifty million dollars on his American Express statement.”

“I guess I was just kind of browsing through their website and not paying close attention to what I was doing.  No way did I intend to buy anything.”

Check out a screenshot from Xinhua‘s story based on the New Yorker‘s satire story. (Credit: Xinhua, screenshot)

iMediaEthics has written to Xinhua seeking a correction and will update with any response.

In March, Xinhua published a fake photo of Time magazine. The real Time magazine photo showed Jack Abramoff on the cover of Time back in 2006, but the doctored version run by Xinhua showed a recently deceased politician, Wu Renbao, on the cover.

Entertainment Weekly noted that earlier this year, “a Chinese outlet was duped by Borowitz’s story that a North Korean missile test was postponed by a Windows 8 glitch.” According to CNET’s report at the time, it was Chinese publication 21st Century Business that reported on the fake missile test story.

Italian magazine Panorama was hoaxed by a Borowitz satire piece last month, as iMediaEthics wrote at the time. Panorama reported, based on Borowitz’s story, that Silvio Berlusconi was planning to run for political office in New York.