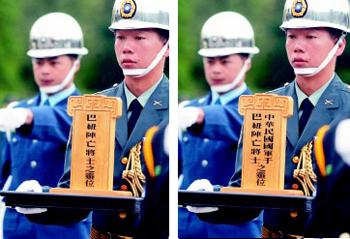 CHINESE FAUXTOGRAPHY AGAIN? In traditional Chinese lettering, the memorial sign on the right states, "The Army of Republic of China, the Soldiers who died in Papua." So why are the symbols CHANGED in the exact image found on Sina.om.cn? See photo on left, detail.

You don’t have to know any Chinese to notice that symbols are missing when comparing the two photos of a solemn WWII Taiwanese memorial ceremony shown above. What happened?

The photo on right, a detail, was originally published in United Daily News (UDN). It shows a wooden memorial sign held during a ceremony, meant to commemorate Taiwan soldiers who fought and died in Papua New Guinea during World War II. In traditional Chinese lettering, the sign states: “The Army of Republic of China, the Soldiers who died in Papua.”

According to Hany Farid, professor of Computer Science at Dartmouth, on March 7th 2009, Sina.om.cn reported that the UDN image was secretly doctored to remove the words– The Army of Republic of China –see image above on left. The sign after photo doctoring says “The Soldiers who died in Papua”.

Someone had removed the words “The Army of Republic of China” because this phrase reminds people of earlier history when Taiwan was  independent and separate from China—something that Chinese government does not want to remember or to happen again.

Although the relationship in between Taiwan and China is one of the most sensitive political issues in the world today, it is still ridiculous to act out the conflict by trying to secretly censor text within a published photograph. My guess, and for full disclosure, I am from Hong Kong, this photo altering was done by someone from China.

In the Chinese tradition, people like to use wood, or similar material to make a memorial signs, to represent both God and family members. Such memorial signs’ major function is for honoring and worship–NOT politics or propaganda tricks.

The person who Photoshopped this picture apparently has nationalistic feeling towards China, but is disregarding those families of fallen soldiers’ feelings of loyalty to their formerly independent country. (See other China government-related fauxtography cases in “Related Stories” below).

UPDATE: 06/29/09: Due to editing error author’s birthplace was mistated. It is Hong Kong.