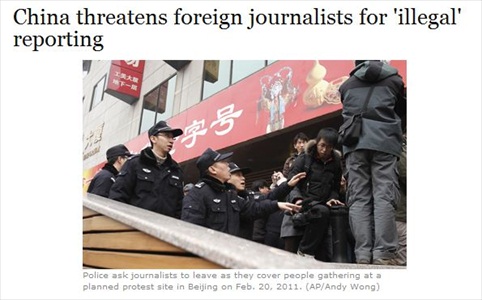 Foreign journalists have reportedly been "threatened" by the Chinese government and accused of "fabricating news." (Credit:CPJ)

In a recent commentary article, Chinese newspaper The Global Times “accused foreign journalists in the country of fabricating news,” the AFP, a foreign wire service, reported.  According to MondoTimes, the Global Times is the “official newspaper of the Chinese Communist Party.” It should be noted that the Global News, as a propaganda arm of the Chinese Communist Party, is itself an organ that regularly fabricates news.

The commentary was published the day after foreign journalists were “threatened” by police that “they could lose permission to work in China unless they obey vague new restrictions on covering such rallies,” according to the AFP.

According to Reuters, foreign journalists have been told they have to be granted permission by police “three working days in advance” of reporting in “certain bustling parts of central Beijing.”  If they don’t, then they could “lose their government-issued journalist cards and residence visas.”

“In some cases, reporters have been accused of trying to help stir up a revolution, disrupt harmony in China and simply cause trouble,” the Foreign Correspondents Club of China is quoted as saying.

“Making up stories and fabricating news … does not conform with journalist ethics nor does it really uphold justice,” the commentary article reportedly stated.

According to the AFP, “Police have issued vague instructions to foreign journalists, telling them they must apply for permission to report at demonstration sites in Beijing.” But, the Foreign Correspondents Club of China stated to its members that the police haven’t approved any requests for permission.

Christian Science Monitor added in a March 3 report that the Chinese government warned foreign journalists “that their visas will be revoked if they continue to try to report on demonstrations held as part of a Chinese ‘Jasmine Revolution.'”

According to the Christian Science Monitor, the “dozens of foreign journalists who tried to cover putative demonstrations” were called to be interviewed by the police.

The Committee to Protect Journalists noted that journalists from the Associated Press, the AFP, and the BBC, among others, received warnings over their “filming” and “‘illegal’ reporting” in parts of China.

“The Chinese government is doing itself serious damage with these blatant attempts to bully the foreign media into silence.  These vague warnings, contradictory regulations, and intimidation of the international press corps show that China’s commitments on press freedom to secure the Olympics were just a veneer.”

PEN American Center and the CPJ issued a statement March 3 calling for the end of “censorship and repression” in China, citing recent cases in which journalists have been injured, attacked, harassed and detained.

Reporters without Borders noted this week that “keywords such as Jasmin (a call for a ‘Jasmin Revolution’ in China has been made), Egypt, Libya, Tunisia and democracy have been blocked in search-engines” and that journalists weren’t allowed to report on Feb. 20’s demonstrations.

iMediaEthics has written to the Foreign Correspondents Club of China and will update with any response.

As iMediaEthics reported last month, the Chinese Propaganda Department required Chinese journalists to be trained for six months on how to “eradicate false news,” among other things.

China is ranked 171 of 178 countries on Reporters without Borders 2010 press freedom index list.