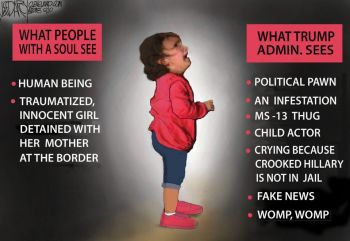 The Cleveland Plain Dealer‘s editorial cartoonist Jeff Darcy drew a cartoon for the paper based on the young Honduran girl shown on Time magazine’s cover.

Darcy now has corrected his cartoon and explained what happened.

“My June 20 cartoon, in which I drew the image of the girl, erroneously stated the girl had been taken from her mother.  Saturday the cartoon and its original post on Cleveland.com were corrected and updated.   I was remiss in not confirming, as best possible, the status of the girl and wording the cartoon appropriately when I created it. “

The cartoon shows the young girl in the middle of two text columns. The column on the left is headlined, “What people with a soul see,” and the column on the right reads, “What Trump admin. sees.”

Chris Quinn, editor of the Plain Dealer, told iMediaEthics by e-mail, “When the news broke that the girl in the photo had not, in fact, been separated from her mother, several members of our audience asked how we would address that information with regard to Jeff Darcy’s cartoon.”

“Jeff’s cartoon was not inaccurate, really, in that the labeling said that people with a soul see in that girl a child separated from her mother,” he explained. “That’s true.  But, let’s face it, the girl had become a symbol of the separations, and that’s why Jeff used the image in his cartoon. It would be disingenuous to let the cartoon stand through gymnastics of logic. Jeff is one of the most responsible journalists I know, and he immediately realized he should change the cartoon and explain why, which he did. An unwillingness to address an issue like this would harm our credibility.” 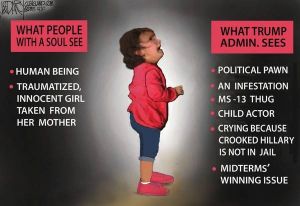