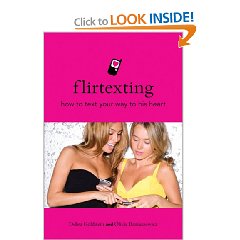 CNN's caption states: "The authors of 'Flirtexting,' above, say women need to learn how to text their way to love." StinkyJournalism asks: "Just because these women say it, does CNN have to repeat it?"

Didn’t CNN notice that a new book for women about flirting correctly via text messages reinforces tired stereotypes about women as well as underestimating their intelligence?

The CNN.com article on “Flirtexting: How to Text Your Way Into His Heart” describes the book as hinged on the presumption that women haven’t been able to grasp the oh-so-complex technology of text messaging as fast as men have. They write: “The book’s co-authors, Olivia Baniuszewicz and Debra Goldstein, seek to explain the dating scene based on the premise that men understand text messages while women need to catch up.”

Was it Teen Beat magazine or CNN where I just read the following? (Sorry, it was CNN). ” ‘ It’s official. Boys text, therefore girls must learn how to flirtext ‘ they say on their Web site, flirtexting.com.”

The authors warn women that there is a proper time frame to send replies and that abbreviations will alienate potential beaus. Tips  for women include, according to CNN, refraining from texting while intoxicated. They further warn that men texting after 10 p.m. may only be looking for quick fun.

While the book is based on a fairly new technology, its obvious that the premise is deeply entrenched in old views. Despite the authors’ assertion that flirtexting is a new “empowering” skill, their examples in the CNN interview fail to support this view. Women have been asking men out for dates since my mother’s generation. How does texting make this new?

Gawker, unlike CNN, reported that “Flirtexting” is definitely “the stupidest book deal you’ll hear about all week.” StinkyJournalism agrees.