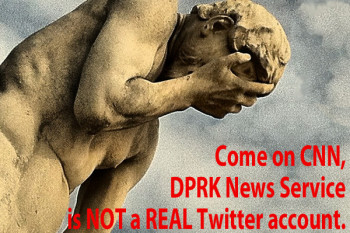 The false information included in the CNN report claimed: “Earlier, the state-run North Korean DPRK news service tweeted that the nation’s finance minister had frozen all of President Barack Obama’s assets in response. They did not say what those purported assets were.”

As iMediaEthics has previously reported, DPRK_News is a satire account run by two bloggers from the site Popehat. The bloggers didn’t give their names to Newsweek, which interviewed them about their satire account and some of the several news outlets duped by their tweets. Fox News, Newsweek, the Huffington POst, and Reuters are among those who have fallen for the account.

While the CNN article has been corrected, an earlier version of the article with the false information is republished on Fox8.com.

A note at the bottom of the Jan. 4 CNN article, “North Korea pushes back against U.S. sanctions for Sony Hack,” states “Note: An earlier version of this story included a tweet from what was actually a parody account. CNN regrets the error.”

Conservative media news site Newsbusters noted that Popehat tweeted out a screenshot of the CNN error.

Screenshot, before it’s memory-holed, and yes this head is going on the family wall. pic.twitter.com/iDznxxuwIY
— Popehat (@Popehat) January 4, 2015

CNN told iMediaEthics by e-mail it didn’t have any further comment beyond its correction.