CNN Sorry for 'If Jews are People' Graphic - iMediaEthics

CNN Sorry for ‘If Jews are People’ Graphic 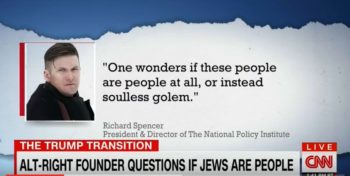 CNN apologized for an inappropriate chyron graphic on air this week reading “Alt-Right Founder Questions if Jews are People.” The chyron was broadcast during an episode of The Lead with Jake Tapper hosted by Jim Sciutto.

CNN told Variety in a statement, “It was poor judgment and we very much regret it and apologize.”

When asked for comment, CNN’s Barbara Levin told iMediaEthics, “As we said, we regret it and apologize.”

Jake Tapper, who typically hosts that show, was on vacation but criticized the chyron in posts on Twitter.

unless you watched the segment you don't know what the message was. The chyron was unacceptable.

@maiaefrem am off today but the chyron is unacceptable and we are dealing with this. I get it.

they were not given a platform. The chyron was, however, unacceptable and will not happen again.

yes, I'm off this week and I'm furious about that chyron and my staff has heard from me. Unacceptable.

Meanwhile, the Boston Globe‘s Matt Viser, who was on the CNN segment in question as well, wrote about the experience, the Associated Press noted.

In an article for the Boston Globe, Viser wrote about his appearance in the segment because a screenshot of the segment with the chyron that went viral featured him with his name and title along with the chyron. That made it appear that perhaps he had been the person who had questioned “if Jews are people,” when he hadn’t. As a result, he said he received lots of nasty messages from viewers who thought he was the alt-right leader. 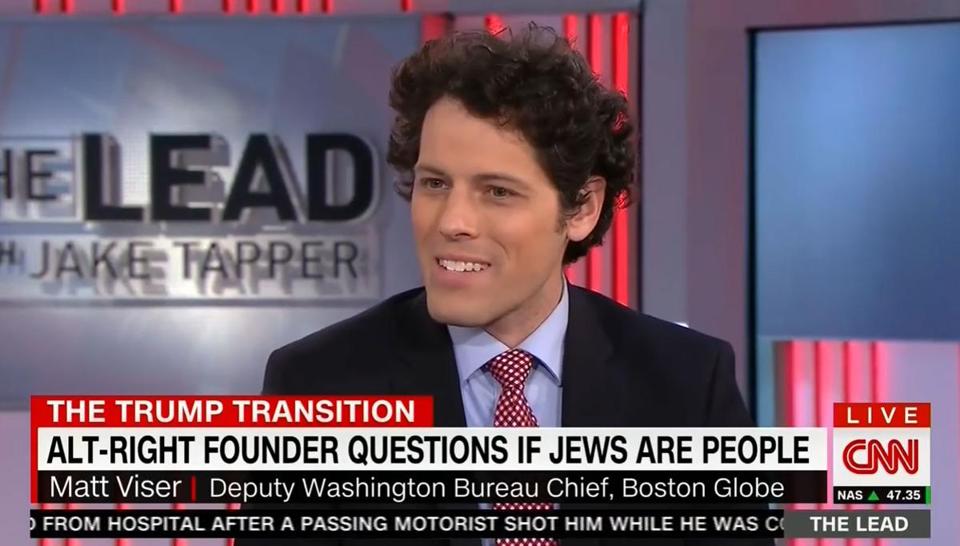 A screenshot of the CNN segment. Matt Viser from the Globe is pictured but not the person who asked “if Jews are people.”

“Even though my title and affiliation with The Boston Globe were included, at first glance, some thought I was the alt-right founder,” Viser wrote. “And that I was questioning whether Jews are people. And that CNN was giving me a platform to air those views.”

To be clear: I believe Jews are people (I’m also not the alt-right founder referenced on the chyron) https://t.co/G6E7sy6eFT

The person in question who HAD questioned “if Jews are people” was Richard Spencer. He had said: “One wonders if these people are people at all, or instead soulless golem.”

CNN Sorry for ‘If Jews are People’ Graphic