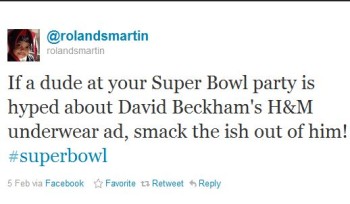 See above a screenshot from one of the tweets.

Anchor Roland Martin was suspended from CNN over his “homophobic tweets during the Super Bowl,” the New York Daily News reported.

The Daily News noted that Martin defended his tweets “at first” by “saying that he was just making fun of soccer.”   The Washington Post’s Erik Wemple broke down Martin’s original Feb. 6 statement on the tweets.  Martin’s Feb. 6 apology said:

“It was meant to be a deliberately over-the-top and sarcastic crack about soccer; I do not advocate violence of any kind against anyone gay, or not…As anyone who follows me on Twitter knows, anytime soccer comes up during football season, it’s another chance for me to take a playful shot at soccer, nothing more.”

In a Feb. 8 statement, CNN called Martin’s tweets “regrettable and offensive” and “inconsistent with the values and culture of our organization.” GLAAD, which originally called for CNN to fire Martin, called the suspension a “strong stand against anti-LGBT violence and language” and added that the group wants Martin, CNN and GLAAD to “work together as allies and achieve our common goal of reducing anti-LGBT violence as well as the language that contributes to it.”

The Washington Post’s Wemple called the suspension a “strong decision” and compared Martin’s tweets to “the equivalent of cheerleading for violence against gays.”

On the other hand, the Washington Post’s Alexandra Petri suggested that CNN is giving Martin’s comments too much weight and blowing the incident out of proportion. She wrote:

“The assumption underlying the whole furor about Martin’s tweet is that what Martin says on Twitter is an incitement to, well, anything at all. Twitter consists of the sustained delusion that people actually care about what you are saying.”

Noting “I don’t want anyone to live in a homophobic climate, and I know that homosexual people are being beaten up,” Petri reminded that “there’s a line between saying something on Twitter about smacking people and inciting actual violence, and it’s worth preserving.”