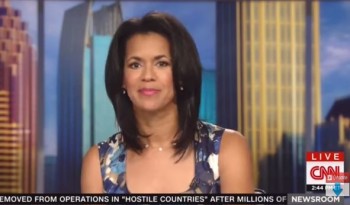 Fredricka Whitfield apologized today for her comments about the Dallas gunman. (Credit: YouTube)

CNN’s Fredricka Whitfield said she “misspoke” earlier this weekend after she called a Dallas gunman who shot at the police in Dallas Police Headquarters “very courageous and brave.”

On Saturday, Whitfield said on live TV, “It was very courageous and brave, if not crazy as well, to open fire on the police headquarters, and now you have this scene, this standoff.”

On air, Whitfield said Sunday “Yesterday, during a segment on the Dallas Police Department attack, I used the words ‘courageous’ and ‘brave’ when discussing the gunman. I misspoke. I in no way believe the gunman was courageous, nor brave,” Mediaite reported.

CNN spokeswoman tells me that @FWhitfield will address this on-air today; she'll say she "misspoke" & she does not believe gunman was brave

CNN's Fredricka Whitfield will apologize after calling the gunman in Dallas "courageous and brave". Fort Worth… http://t.co/jKa5PfHCjw

"Courageous and brave" to shoot at police officers with an assault rifle. Get a clue and WAKE UP! https://t.co/I1hYFlfpv4