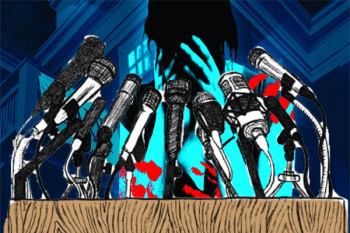 Columbia Graduate School of Journalism’s Dean Steve Coll and Academic Dean Sheila Coronel took questions Monday from a full room of reporters about their recently released investigation into the now-discredted Rolling Stone report “A Rape on Campus” by Sabrina Rubin Erderly. Erderly’s report told the now-infamous story of an alleged gang rape of student “Jackie” by members of the University of Virginia chapter of Phi Kappa Psi fraternity.

Reporters from Fox News, CNN, ABC News, NBC News, CBS News and the the New York Times were in attendance. iMediaEthics was there, tweeting from @SSmithWriter.

Watch the full press conference below.

Coll and Coronel repeatedly emphasized that the problems with the report weren’t the source Jackie’s fault but all fell on Rolling Stone for failing to vet her story and take basic journalistic steps of fact checking, contacting the accused for comment and offering clear attribution and transparency.

“Failure was not the subject or source’s fault,” Coll said. In an interview with the New York Times April 5, Rolling Stone publisher Wenner seemingly put the blame on Jackie despite the Columbia report saying it was Rolling Stone’s fault.  “The problems with the article started with its source, Mr. Wenner said,” the New York Times reported. “He described her as ‘a really expert fabulist storyteller’ who managed to manipulate the magazine’s journalism process. When asked to clarify, he said that he was not trying to blame Jackie, ‘but obviously there is something here that is untruthful, and something sits at her doorstep.'”

The pair also refused to comment on whether they agreed with Rolling Stone’s decision not to punish any of its staff for the report. “These are not failures of dishonesty in an individual,” Coll said. Coronel said it was “probably a wise decision” for Rolling Stone to unpublish, noting that the article won’t ever disappear because of the internet. “You wouldn’t want to lose the artifact of this story as a subject of research,” Coll commented.

Attendees asked if their review also extended to other work by the reporter Erderly or Rolling Stone but Coll and Coronel said that they only focused on the “Rape on Campus” story. “We read” Erderly’s previous work but “we didn’t ask” for the “same access” to review it.

As for Erderly, “she believed in the story up until it was published….she believed her story to be true,” Coronel said. Columbia spent six to seven hours over two days with Erderly, who “cooperated fully and professionally,” reviewing the story.

The pair also didn’t learn what really happened to Jackie, although they did look into it, determining it was “unknowable.” They had no contact with Jackie, except through her lawyer who wouldn’t answer questions, they said.

Despite the problems in this report, the two academics recommended journalists should still continue reporting on cases of sexual assault.

Coll and Coronel said Columbia was brought in because Rolling Stone “wanted this to be a teachable error” and the magazine didn’t have the resources to handle such an investigation.

“This report is very much intended to be a piece of journalism about the failure of journalism,” Coll said, later adding that “it’s an important moment in journalism” that will be used in classrooms.

During the press conference, the UVA chapter of Phi Kappa Psi, the fraternity falsely accused of gang rape, announced it is going to sue Rolling Stone. Erderly told Columbia that she never asked specific questions about Jackie’s allegations because she assumed they already knew about it.

Coll and Coronel wouldn’t comment on the lawsuit, with Coll said, “it is sound journalistic practice not to comment on other people’s litigation.”

“It is sound journalistic practice not to comment on other ppls.litigation” – coll on uva frat lawsuit

When asked for comment about the lawsuit and the Columbia report, Rolling Stone declined to comment to iMediaEthics.

Moving forward, the pair repeated the recommendations from their report, calling for Rolling Stone to create guidelines for using pseudonyms and get comment from people criticized.

“Clear attribution is the best defense against this type of reporting,” Coll advised.

“They should be clearer about what they do know,” Coronel added.

Rolling Stone should also weigh the advise of its fact checking department better, the pair said. One of Rolling Stone’s fact checkers pointed out some of the problems with the story but her questions never went anywhere. Fact checkers need an “equal place at the table,” Coll said.

“It is sound journalistic practice not to comment on other ppls.litigation” – coll on uva frat lawsuit

This story was originally published April 6 at 12:35 PM EST and updated throughout the day.