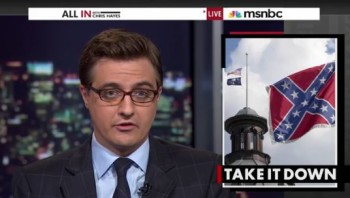 Chris Hayes during a segment on the Confederate Flag (Credit: MSNBC, screenshot)

O’Reilly called Hayes out for the error, Mediaite reported, calling it “gross dishonesty along racial lines.”

O’Reilly was discussing the flag with a guest and said some people see the flag “represents bravery,” whereas others see it representing hate.

“Please notice I didn’t say the Confederate flag symbolizes bravery,” O’Reilly. “I didn’t say that. I was paraphrasing what some Americans believe in order to present both sides of the story.”

He called Hayes a “race hustler” for misquoting him and it was a “complete distortion.”

“I clearly said the Confederate flag represents to me, oppression,” O’Reilly added.

Hayes apologized June 25 and explained he took the quote out of context.

“We do a lot of quoting of other broadcasts and outlets, sometimes to make a narrative point, sometimes to make a political one and sometimes just to make a joke,” Hayes said “And the cardinal rule of this practice is to make sure when you clip someone or quote them you do it in proper context. We failed to do that with a quote I attributed to Bill O’Reilly the other night.

“In a segment on the Confederate flag, I said that Bill O’Reilly said it represents the bravery of Confederates who fought in the Civil War,” Hayes went on. “While it’s true O’Reilly literally uttered the words ‘it stands for bravery’ while talking about the flag, it’s also quite clear from the context of the discussion he was having, he was not giving his own views but talking about how some other people view or understand the flag.”

“We should not have attributed that view to him” Hayes admitted. “Fair is fair, I got it wrong and I apologize.”

Below watch Hayes’ apology, via Mediaite/WorldNewsToday.