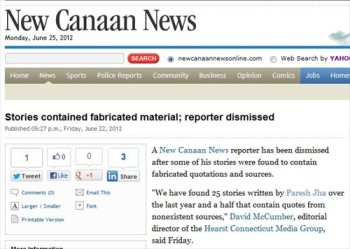 Connecticut’s New Canaan News fired reporter Paresh Jha for making up “quotations and sources” and apologized for the “gross violation of our standards.”  New Canaan News is a weekly newspaper with a circulation of 6,400 copies, according to Mondo Times.

A June 22 note on the newspaper’s website quoted parent company Hearst Connecticut Media Group’s editorial director David McCumber as saying “We have found 25 stories written by Paresh Jha over the last year and a half that contain quotes from nonexistent sources.”   For comparison, infamous New Republic fabricator Stephen Glass “fabricated details in 27 articles.”

The newspaper noted that it found out about the fabrication during fact checking, that it’s going to review all of his work and that it’s unpublishing fabricated content.

Poynter’s Craig Silverman called for the New Canaan News to keep up the fake content but to “add editor’s note at the top of all affected copy” so readers can learn “which stories were affected.”

Jha won last month “two awards at the Connecticut Society of Professional Journalists Award Ceremony.”  In the New Canaan News’ report about Jha’s awards, Jha is quoted as saying: “More than anything else, the awards represent the hard work the entire staff of the New Canaan News puts into every article we run.”

Journalist Teri Buhl noted that Jha “was the only staff journalist on the New Canaan News masthead,” and questioned if Jha “was under pressure to get” good quotes.

According to Jha’s public LinkedIn page, “many of my articles make it into the Stamford Advocate and Connecticut Post on a weekly basis.” We have written to David McCumber asking if the two newspapers will also review Jha’s work and will update with any response.