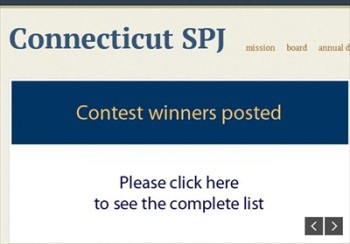 We wrote to the Connecticut SPJ asking if the fabrication news would affect Jha’s awards.  Connecticut SPJ president Cindy Simoneau responded to iMediaEthics’ e-mail inquiry about Paresh Jsa with the group’s memo on Jha.

According to Simoneau, the Connecticut SPJ is reviewing the articles in question and deciding if it will take “any action.”  The Connecticut SPJ also noted that it “condemns” violations of ethics.  We’ve posted the full memo below:

“The Connecticut Society of Professional Journalists has become aware Paresh Jha of the New Canaan News has been dismissed by Hearst Connecticut Newspapers ‘after some of his stories were found to contain fabricated quotations and sources.’

“As an organization, CT SPJ condemns all acts of fabrication, plagiarism and other unethical practices. And, applauds all media organization that take swift action to no longer employ individuals engaging in such methods.

“Jha was a recent recipient of two, 2011 Journalism Excellence Awards. CTSPJ has sought information from Hearst about verification of sources and reporting included in these two, specific award-winning packages. The CTSPJ Board of Directors and officers are considering whether any action related to these awards should be taken.”

UPDATE: 7/9/2012: 10:19 AM EST: The Connecticut SPJ announced June 29 that it asked media lawyer Roy S. Gutterman to investigate the two stories by Jha that the club awarded in May.  The club wrote that it will review any “possible actions” related to Jha’s awards after Gutterman’s investigation.  See our story on this investigation here.