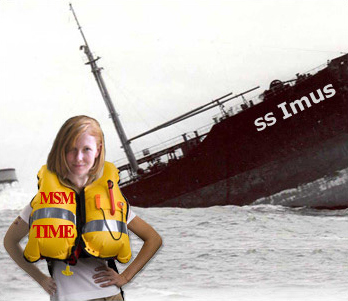 Was it a risky or visionary update for stodgy ol’ Time when it hired Ana Marie Cox one year ago? After all, Cox was quoted calling herself a “failed journalist.” When asked by Paula Zahn if she considers it “a badge of courage” that the raunchy blog she founded, Wonkette, was described in the Christian Science Monitor as “a quiet victory for creeping ‘National Enquirer’ values,” Cox said yes.

“I’m actually sort of proud of that,” Cox told Zahn. “I think they’re – the ’National Enquirer’ is a very popular magazine! And a lot of people do get their information from it.”

Recently, Cox’s feet (and presumably her editors’ too) were put to the fire at Time Inc. by her readers who asked in droves, “Ana Marie, are you still going on Imus? ” Ana Marie Cox knows a sinking ship when she sees one.

Time Inc. handlers, editors and suits had to be concerned. It was a fulcrum. Imus and company were on the brink, and Ana Marie Cox – former Wonkette and bawdy blog founder – had been a regular member of the Imus crew for the last nine months.

Media ethicist, Jeffrey Dvorkin, suggested on the Committee of Concerned Journalists’ Web site, that not only Imus, but his regular gang and their bosses should share some blame. Dvorkin writes, “Other journalists who appeared on his program might also take this opportunity to think about their own roles and reputations. The news organizations that employ them might also think about their responsibility in this mess too.”

Time first hired Cox in March 2006, as a “contributing writer,” and quickly promoted her to Washington editor four months later.

From her mainstream media (MsM) Time platform, a blog, called “Swampland: About Politics in Our Nation’s Capital,” Cox wrote, “I’ll have some more fleshed-out thoughts on the matter in the magazine this week, but for now, since many  people have asked: No, I won’t be going on Imus anymore. Having said that, it’s not like they’ll be inviting me back.”

This post generated even more readers writing into Time’s hire (on the magazine’s Web site no less) to criticize, praise or question the legitimacy of Cox’s decision to dump Imus. “Why wouldn’t you go on Imus?” readers asked. “It seems like your cup of tea.” Katy bar the door. The public debate was bringing the Imus debacle, and Ana Maria’s colorful Wonkette past to the front steps of Time Inc.

An answer to this charged question about Cox’s role in and reactions to the Imus scandal had to be carefully supplied. Hence why she posted the curtain raiser days before her full, official stance could or would be made in the print version of Time.

Let’s face facts. The regular stint on Imus more fit the rebel Wonkette tattooed chick than the staid Time Inc. gig. The fall of Imus and Cox’s participation on the Imus show can reflect poorly on Time Inc., and the judgment of the editors who hired her. Worse, the reminder of her crude Wonkette history makes Cox an Imus Mini-Me.

Cox Only “Succumbed” to the Boy’s Club “Mentality”

A close reading of her article in last week’s Time, “An Imus Guest Says No More,” reveals the corporate spin underpinning a new Time sanitized incarnation of Ana Marie, who now positions herself as having only “succumbed” to the boy’s club “potty-mouth” talk.

Like a good girl who went wrong only after so much pressure and a few drinks, Cox writes, “As the invites kept coming, I found myself succumbing [emphasis mine] to the clubhouse mentality that Imus both inspires and cultivates. Sure, I cringed at his and his crew’s race-baiting (the Ray Nagin impersonations, the Obama jokes) and at the casual locker-room misogyny (Hillary Clinton’s a ‘bitch,’ CNN news anchor Paula Zahn is a ‘wrinkled old prune’), but I told myself that going on the show meant something beyond inflating my precious ego.”

Cox says she’s now “embarrassed” by the “crassness” and no longer wanted to “play along” with “childish crudeness.” She told Zahn back in 2004, “Everyone likes to think they have a sense of humor until it’s directed at them. But then you have to play along.” Here Cox gave the rules to the Imus game that she had long been playing on her own. Political hacks and pundits, even book authors, get something symbiotic along with the swallowing of pride and professionalism, in exchange for the double dose of airtime, both radio and television ( CBS Radio and MSNBC, respectively). The Rutgers women’s basketball team had no such benefit or choice to be subjects of slurs, so that they could also have the privilege and opportunity to play along.

As if this was not enough, and as if sticking a knife directly into Imus’s back had no sting for her, Cox dismisses Imus and his show as completely void of any worth in Time. “The sad truth is that unless you have a book to promote, there’s often no other reason any writer or columnist has to do the show.” Distance and then devalue, so the spin playbook goes. Imus is someone, she also states in the same Time piece, is correct when he claims to have “discovered her.”

Who is the real Ana Marie at TIME … Vulgarian or Victorian?

Cox’s hypocrisy is especially stunning when you take the time to compare her cloyingly coy Time musings with words from what appeared to be the real Ana Marie of Wonkette. It’s impossible to believe, despite the fine skills of Time spinners, that Cox went from raunchy Wonkette broad to too demure to speak naughty words on the pages of Time Inc., but that did not stop them from trying.

“Once, after I was on, he and his gang proceeded to discuss my “creamy” skin and compliment my nice pair of … ‘eyes,’” Cox writes, as if she were a fine maiden needing rescue. “I later asked the producer to remind him that as far as I knew, my father was listening. Now I’m going to ask my dad not to anymore.”

Despite her famous “ass f–king” remarks in Wonkette, here in her post-Imus Time apology, Cox reaches out for readers’ sympathies with pseudo-humility. She reckons she was only invited by Imus to be “leered at” and for the “tantalizing prospect that I might say something scandalous or racy.” Oh dear, I suppose Imus did want some of the butt-f–k talk. But that potty mouth made her one of the guys before she ever stepped on the show, not a victim they brought on the program to lead astray.

Cox may have left Wonkette and Imus and landed on her feet at Time; however, it’s apparent that, despite leaving the boys’ club, Cox continues to think in what is, for the majority of folks, the distorted shock jock morning zoo state of mind.

Cox writes, “Of course, having a venue where one can speak frankly – talk in the way everyone does privately (emphasis mine) ­ about political figures can be liberating. I have said things on his show that cannot be printed here.” So now it’s a free speech issue?  She and Imus have virtue not vice for they dare to speak out loud what the rest of us, cowardly hide. Spin, baby, spin.

Cox continues, “But do I really want to give my tacit approval to someone whose greatest gift to public discourse could be fairly described as allowing pundits to get potty-mouthed?”

Tacit approval? She gave her full-blown endorsement by being a regular on the show. However, Time Master Spin-Meisters know that for Ana Marie to insincerely muse about whether or not she should continue giving tacit or indirect approval with her participation actually defines and manufactures for readers that her relationship to Imus and the show was minor, and thus absolves her and Time, by proxy of affiliation.

Cox may have bootstrapped herself from lurid comments in Wonkette to a fancy mainstream media job at Time Inc., but sadly, she has not followed what mom likely told her, “No matter what, be yourself.”

Literally just days before the scandal, Ana Marie, Time editor and newly minted Victorian lady, and Imus were discussing, what she suggested, was her “weakness” for liking “pricks,” such as former Mayor Rudy Giuliani. Imus , right on cue, parried with sexual overtones and bait to Cox that he was a “prick.”

Who is the real Ana Marie at Time: Vulgarian or Victorian? What ever are Time editors thinking? Do they really believe that tabloidism and serious journalism mix or that they can trick the public into believing that Time and Cox have taken a unified and authentic stand?

P.S. I emailed a few questions to Cox about her Time article and will post her response if I receive one.