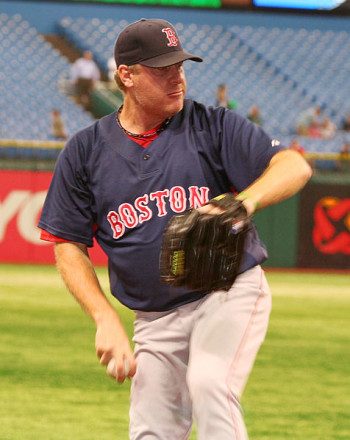 Schilling, a retired Major League Baseball pitcher, tweeted Aug. 25 an image of Hitler with the text “It’s said only 5-10% of Muslims are extremists. In 1940, only 7% of Germans were Nazis. How’d that go?” Schilling commented, “The math is staggering when you get to true #s.” According to Sports Illustrated, Schilling “posted the same image on his Facebook page earlier in the day.”

After being suspended, Schilling tweeted that it was “100% my fault” and admitted he made a “bad decision.”

I understand and accept my suspension. 100% my fault. Bad choices have bad consequences and this was a bad decision in every way on my part.

ESPN told iMediaEthics by e-mail:  “Curt’s tweet was completely unacceptable, and in no way represents our company’s perspective. We made that point very strongly to Curt and have removed him from his current Little League assignment pending further consideration.”

ESPN noted in its online report about the suspension “Schilling was pulled from the Little League World Series on Wednesday. On Thursday, ESPN confirmed he would not be working this week’s Sunday Night Baseball telecast.”

SB Nation highlighted other posts about Muslims by Schilling on social media that also are questionable. ESPN didn’t respond to iMediaEthics’ question about this. Fox News reported that previously Schilling “posted several questionable memes to his Facebook page and, in March, the three-time World Series champion verbally jousted with and publicly exposed Twitter users who threatened to sexually assault Schilling’s daughter after he congratulated her on being accepted to Salve Regina University in Rhode Island. ”

In addition, “Last November, Schilling took to Twitter again and engaged in a fiery debate with ESPN colleague Keith Law over the theory of evolution, which Schilling does not believe in. The confrontation earned Law a five-day suspension from the social network. Schilling was not punished.”