Plagiarism at the UK Daily Mail? 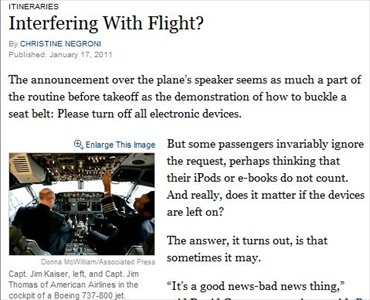 The Daily Mail has been accused of plagiarizing a New York Times article about using electronic devices on airplanes.

However, since the claims of plagiarism first surfaced in a post on Poynter Jan. 20, the article’s byline has been changed and some of the alleged plagiarized quotes have reportedly been removed from the story.

The Daily Mail reportedly has ” the second-highest traffic of any newspaper website in the world.”

In a Jan. 20 post, Poynter’s Jim Romenesko wrote “Somebody call the Plagiarism Police on the Daily Mail!” His post appears to be the first to call out claims of plagiarism.

Romenesko highlighted a passage in the New York Times’ Jan 17 article and the Daily Mail’s Jan. 19, “noting there are many other similar passages.”

As example, he noted the Times reported:

“Many of these devices transmit a signal, and all of them emit electromagnetic waves, which, in theory, could interfere with the plane’s electronics. At the same time, older planes might not have the best shielding against the latest generation of devices, some engineers said.

while the Daily Mail wrote:

“Most personal devices transmit a signal and all of them emit electromagnetic waves which, in theory, could interfere with the plane’s electronics. At the same time, older planes might not have the best protection against the latest generation of devices.”

According to Romenesko, “there are many other similar passages” in both reports.

Likewise the New York Observer wrote: “We were going to go through and pull out all of the verbatim passages, so you don’t have to toggle between tabs as you relish giving Thomas a mental shaming, but there were too many. Total cut and paste job.”

The New York Times’ Jan. 17 article by Christine Negroni, “Interfering with Flight,” cited many sources in its report about the turning off of electronic devices for airline flights.  See here.

The Daily Mail story, called “Electronic devices may cause plane crashes – and older aircraft are especially vulnerable” (see here)  was  updated Jan. 21 and reportedly in the update the byline was changed from Liz Thomas to “Daily Mail reporter.”

Thomas has commented to Yahoo News that “This has nothing to do with me. I did not write the piece at all. I am away on holiday.”

“I can tell you that an inquiry is underway to discover how this happened and [we will] deal with the matter appropriately,”

“An earlier version of this article was mistakenly attributed to the writer Liz Thomas. We also regret that a revised version of the article also failed to attribute the source to the New York Times.”

The updated version of the Daily Mail story quotes Bill Strauss, David Carson, and Institute of Engineering and Technology’s Will Stewart

Yahoo News reported that the Daily Mail removed Thomas’s byline and that the article “had been edited and cut down significantly from its original form sans the lifted Times text.”

StinkyJournalism is writing to the New York Times writer for comment and will update with any response.