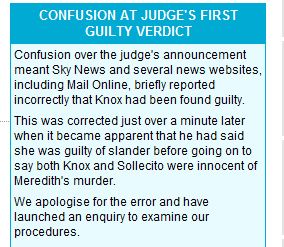 The Daily Mail published an apology in a sidebar of a follow-up story on Amanda Knox. (credit: Daily Mail, screenshot)

The Daily Mail has announced an “enquiry” into its publication of an incorrect news story reporting (wrongly) that the young American woman Amanda Knox was found guilty of murder in her Oct. 3 appeals hearing, the UK Press Gazette reported.  See iMediaEthics’s story on this here.

The Daily Mail responded to the criticism of its publication by stating:

“It is common practice among newspapers to prepare two versions of an article ahead of a court verdict and these are known as ‘set and hold’ pieces.”

The Mail added that Pisa, the author of the Mail article, “had no involvement in the decision” to post the article and apologized for the “error.’

Further, the Mail defended the article’s inclusion of quotations from the prosecutors on the wrong verdict.  While StinkyJournalism was unable to ever find those quotes reported by another outlet, the Mail stated “The quotes were obtained from various parties in the event of either a guilty or not guilty verdict.”

In other words, the Mail wants people to believe the preposterous, science-fiction-like notion that they were able to obtain quotes from reliable sources about an event that did NOT take place.

In a sidebar box on an Oct. 4 Daily Mail story on Knox, the Mail suggested that the error was simply “confusion.”  According to that notice, the Daily Mail apologized and stated:

“Confusion over the judge’s announcement meant Sky News and several news websites, including Mail Online, briefly reported incorrectly that Knox had been found guilty. This was corrected just over a minute later when it became apparent that he had said she was guilty of slander before going on to say both Knox and Sollecito were innocent of Meredith’s murder.”

The Mail wasn’t alone in erring in its Amanda Knox trial reporting, though.

As the Washington Post noted, the Guardian reported “Knox has lost her appeal,” but that information was published in a live blog and not a full article. Also, the Guardian published a correction and apology.

The Atlantic Wire published a screenshot from the UK Sun’s website that inaccurately declared “Amanda Knox is guilty of killing Meredith Kercher.”   The link for that story now redirects to the Sun’s homepage.