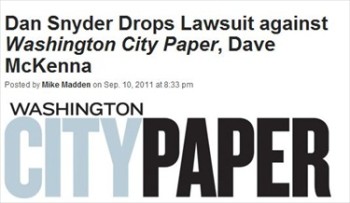 Washington City Paper announced Sept. 10 on its website that Dan Snyder moved for the lawsuit against City Paper to be dismissed. (Credit: City Paper, screenshot)

Tony Wyllie, the Redskins’ spokesperson, commented on the dropped lawsuit in a statement, according to CBS Sports.  Wyllie stated, in part, that:

“The lawsuit was pursued as a means to correct the public record following several critical factual misstatements in the Washington City Paper article. In the course of the defendants’ recently filed pleadings and statements in this matter, the Washington City Paper and its writer have admitted that certain assertions contained in the article that are the subject of the lawsuit were, in fact, unintended by the defendants to be read literally as true.

“Therefore, we see nothing further to be gained at this time through continuing the lawsuit. We prefer to focus on the coming football season and the business at hand.

In response, the City Paper reiterated that it thought the lawsuit “was a baseless one, designed to intimidate a journalist and a publication that have been among his most persistent critics” The newspaper denied that it libeled Snyder and noted that it thought it wouldn’t have been found guilty of libel had it gone to court.  The newspaper’s full statement is available here in the City Paper’s Sept. 10 story on the move to dismiss the suit.

The City Paper noted that readers donated about $34,000 to its “legal defense fun.” The City Paper added: “Today, we got what we wanted all along: dismissal of a case expressly designed to pressure us, and filed by a man who now apparently says he never even read the story in the first place.”

The Washington Post’s Erik Wemple (also a former Washington City Paper editor) suggested that Snyder dropped the lawsuit because of the court dates timing with football season.  As Wemple noted, the suit was dropped “just hours before” the Redskins’ first game of the season and the next hearing in the case would have been “two days before a critical” Redskins game.

“Statements from both sides indicate that the cessation of these hostilities is a one-sided matter. Snyder is dropping the lawsuit, and the paper is giving little in exchange — merely a commitment not to seek payment of its legal fees and to refrain from countersuing, according to Washington City Paper Editor Michael Schaffer”

Wemple reported that the City Paper’s editor, Schaffer, criticized Wyllie’s statement as it states the reason for dropping the lawsuit is that the City Paper “admitted that certain assertions contained in the article … were, in fact, unintended by the defendants to be read literally as true.”  As Wemple explained, City Paper has defended the story “since Day 1” with that reasoning.

iMediaEthics wrote in February when Snyder filed the lawsuit and asked for “$2 million in general damages plus unspecified punitive damages and court costs.” That lawsuit also alleged that the doctored photo was anti-Semitic. In May, Snyder subpoenaed the Washington Post and the Washington City Paper to get “all documents” about Snyder between the Post’s Dan Steinberg and the City Paper’s McKenna.

In April, Snyder also re-filed the lawsuit for what he called “legal reasons” including jurisdiction. However, he also changed the lawsuit to call for less money and drop the charges of anti-Semitism.

Snyder told the New York Times earlier this week that he hadn’t read the article in question. He claimed that he could still file a suit “Because I heard all the details. But the entire piece? I’m not going to read that.”

He stated that he thinks “they were just wrong. I mean, all we asked for, and continue to, is a simple apology, a simple correction.”   He also called the City Paper “tabloid journalism.”