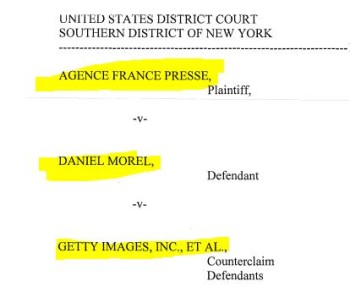 A New York District Judge ruled that it was a violation of copyright law for Agence France-Presse and the Washington Post to distribute photos that it found on Twitter “for commercial use,” Reuters reported.

Photographer Daniel Morel sued both news outlets for using his photos of “the aftermath of the Haiti earthquake in January 2010.”  As Ars Technica explained, Morel put his pictures “on Twitter using TwitPic,” but a Dominican Republic man Lisandro Suero “illegelly copied” and “claimed them as his own and sold them to the AFP.”

According to Reuters, the ruling “partially granted Morel’s summary judgment motion but also limited damages he could potentially recover” — for example, Morel can sue “AFP and Getty … at most, for a single statutory damage award per image infringed” as opposed to for “each subscriber that used the images.”  Reuters added:

“The judge refused to grant Morel’s motion for summary judgment on whether AFP, Getty and The Washington Post acted willfully, as well as whether the media companies violated Morel’s rights under the Digital Millennium Copyright Act.”

Check out the ruling.

iMediaEthics wrote in early 2011 when judge William H. Pauley decided that Morel could sue AFP over its use of his photos.  Pauley said that by tweeting his photos Morel wasn’t giving up his copyright.