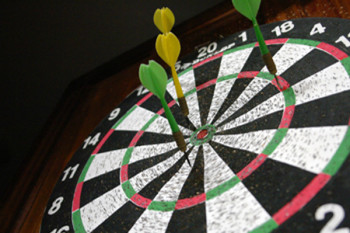 A UK darts champion Phil Taylor tried to get the court to block the Sun from publishing an interview with two of children accusing them of cutting them off.

But the court ruled against his privacy argument, and the Sun was able to publish its report.

“The multimillionaire tried to block The Sun from publishing an interview with two of his daughters who he has left to live on benefits,” the Sun reported, noting that Taylor argued his daughters “were invading his privacy by revealing he had cut them off following his split from their mum Yvonne.”

According to the Sun, Taylor’s defense for his privacy bid was that he “never put any aspect of his personal life into the public domain.” However, the Sun pointed out Taylor wrote two autobiographies and talked to the press about his divorce. The books were 2014’s Staying Power: A Year In My Life and 2004’s The Power: My Autobiography.

“But High Court judge Mrs Justice Elizabeth Laing threw out his claims, awarded The Sun legal costs and said we could publish the story.”

The Sun pointed iMediaEthics to its reporting on the injunction.

One of the daughters, Natalie Taylor, told the Sun  “It is very cowardly of him. Our story was just a cry for help, especially for Kelly. She was trying to reach out to him. He won’t answer our calls.”

The Sun published its story, “£10m ace Phil’s left us living on benefits” July 2.   Daughter Kelly Taylor, said she has been living in a hostel “filled with drug addicts and prostitutes,” has tried to contact her father but his assistant “refuses to give us his number.”

The daughters “said their dad, who is worth £10million, cut them off following his split from mum Yvonne, 52, four years ago.” In contrast, the daughters said their father still helps their two siblings financially.

The Sun noted that it asked Taylor for comment but his spokesperson “refused to comment.” Taylor also has to pay the Sun’s legal costs for the injunction fight. In another story about the daughters’ claims, the Sun reported that “a spokesman for Phil said he is aware of his daughters’ position but declined to answer why he has done nothing to support them.”