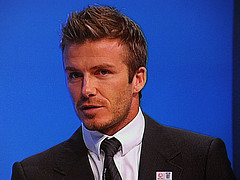 The Guardian has reported David Beckham, pictured above, has threatened to sue In Touch magazine after its story claiming he cheated on his wife and hired a $10,000 a night prostitute. (Credit: Flickr, "Downing Street")

Soccer player David Beckham is reported to expect In Touch magazine to publish a front-page retraction after the magazine ran a cover story claiming the married man slept with a prostitute who charges $10,000 a night.

As the Daily Telegraph reported in June 2009, Beckham won a libel suit after The Daily Star published a front-page story accusing Beckham of having “chatted up” model Mariann Fogorasy.  In that case, The Daily Star apologized to Beckham, retracted the story and “agreed to pay his legal costs.”

Beckham has been married to and has three children with Victoria Beckham, aka Posh Spice of the Spice Girls, since 1999.

According to The Guardian, Beckham “is understood to be planning legal action” for defamation and slander against In Touch.  He intends to sue in the United States and in Germany, where In Touch’s parent company, H. Bauer Publishing, is based.  The Guardian further noted that because the story was only published by In Touch’s website in the United States, Beckham “is restricted in the territories he can  take legal action.”

The magazine’s cover story quoted Irma Nici, “as saying she was a prostitute who slept with Beckham five times in 2007.  She claims he also slept with a second prostitute,” the Associated Press reported.

“His lawyers will demand that the magazine does not repeat the allegations and prints a retraction on its front page,” the British newspaper reoprted.

“(These allegations) are completely untrue and totally ridiculous, as the magazine was clearly told before publication. Sadly we live in a world where a magazine can print lies and believe they can get away with it. We are taking legal action against the magazine,” Beckman’s representative is quoted as telling Us Magazine.

The Guardian also reported that Beckham’s representative “sent legal warnings to Bauer before the magazine was published warning that if the allegations were made in print, he would take legal action.”

Meanwhile, E! Entertainment reported that In Touch believes in its story.

“In Touch would like to reaffirm that we stand by our reporting and have confidence in the credibility of the multiple sources we quote in the story,” E! noted the magazine said in a statement.

The BBC also noted that this isn’t Beckham’s first legal battle with the media.  “Last year, Beckham accepted libel damages from the Daily Star newspaper after it claimed he had made advances towards a model.

iMediaEthics has written to In Touch and will update with any response.