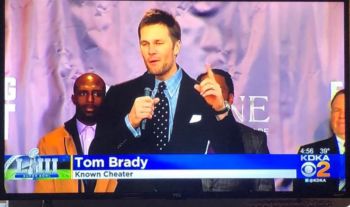 Pittsburgh CBS-affiliate KDKA fired a staffer over a graphic that labeled Tom Brady a “known cheater.”

“The chyron in question ran during KDKA’s 4 o’clock news and identified Brady, who was memorably suspended by the NFL for his role in the Deflategate scandal, as a “known cheater,'” Sports Illustrated reported.

“While fans are entitled to have personal opinions, we have a journalistic responsibility to provide unbiased reporting.  The graphic that appeared Monday violated our news standards.  The individual who created the graphic no longer works for KDKA-TV.”