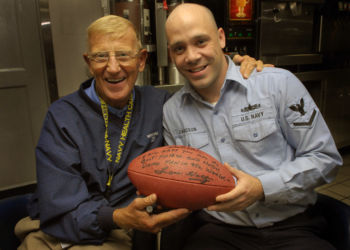 Holtz claimed he never said the word deadbeats and his comments were out of context. The headline was later changed to, “Holtz Goes on Immigrant-Bashing RNC Rant,” according to ESPN.

Holtz said some of his comments, like “I don’t want to become you, I don’t want to speak your language, I don’t want to celebrate your holidays, I sure as hell don’t want to cheer for  your soccer team,” wasn’t representative of his feelings. Instead, the Orlando Sentinel reported, “the suit says Holtz was relating advice from his grandmother, an immigrant, on the importance of assimilation.”

Holtz’s lawsuit called for more than $75,000, the Orlando Sentinel reported. “The terms of the settlement are confidential, but as part of the agreement required a public apology,” according to the Sentinel.

The Daily Beast article carries an update and an editor’s note, correcting that Holtz never said “deadbeats.” They read:

“Editor’s Note 5/3/18: The Daily Beast ran a story on July 19, 2016 with the headline “Lou Holtz at RNC Says Immigrants Are Deadbeats Invading the U.S.”  In his speech, Mr. Holtz did not say that immigrants are deadbeats, nor did he use the word “deadbeat” at all, and we are happy to have corrected the headline to reflect this at the time.  While The Daily Beast stands by the rest of its story, we recognize that Mr. Holtz also spoke to the audience about his poor grandparents, who themselves immigrated to the United States and were processed through Ellis Island.  The Daily Beast sincerely regrets the error in the headline and that Mr. Holtz was embarrassed and hurt by this error.

“UPDATE 10/7/16: The headline on this story has changed. The original headline conflated two points that Mr. Holtz made in his speech – the need for immigrants to learn English, and the group of Americans, whom Mitt Romney in 2012 infamously labeled the ‘47%,’ who, Holtz stated, make their living by the way they vote. But Holtz did not say that immigrants are ‘deadbeats,’ and we sincerely regret this error.”

iMediaEthics has written to the Daily Beast and Holtz’s lawyers for more information.