Depressed should 'Stop Moaning?' UK Paper Apologizes for Column saying 'Bipolar seems to be all the rage' - iMediaEthics

Depressed should ‘Stop Moaning?’ UK Paper Apologizes for Column saying ‘Bipolar seems to be all the rage’ 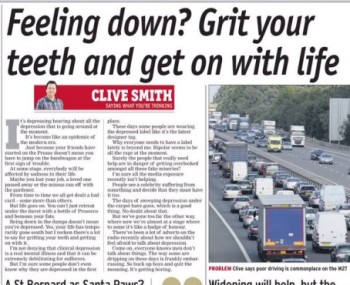 (The column in question via Hold the Front Page)

The Dec. 1 column by Clive Smith was headlined, “Feeling down? Grit your teeth and  get on with life.”

“It’s depressing hearing about all the depression that is going around at the moment. It’s become like an epidemic of the modern era,” Smith wrote.

“I’m not denying that clinical depression is a real mental illness and that it can be extremely debilitating for suffered,” he wrote, adding that, “These days some people are wearing the depressed label like it’s the latest designer tag. Why everyone needs to have a label lately is beyond me. Bipolar seems to be all the rage at the moment.”

“Everyone knows men don’t talk about things,” Smith went on. “The way some are dripping on these days is frankly embarrassing. So buck up boys and quit the moaning. It’s getting boring.”

See the column below, via Hold the Front Page: 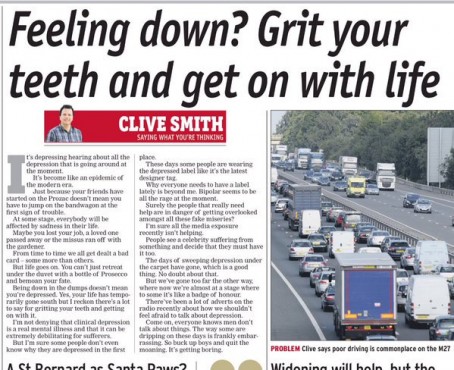 The editor of the Portsmouth News, Mark Waldron, apologized with a Dec. 3 column saying the newspaper likes to include a variety of opinions but “it is clear that some readers were offended by the sentiments expressed in Clive Smith’s column about depression.”

“This was never the aim and nor did the article deny the serious nature of depression. But for any offence caused, I do apologise,” Waldron wrote.

Because 140 characters is not enough, here's my response in today's @portsmouthnews to our readers about that column pic.twitter.com/YX5YaOegKI

“We regularly report on mental health issues, including depression,” Waldron wrote. “We publicise and support the great work carried out by the health tea and charities who specialise in this field and deal day-to-day with the serious effects mental illness have on people’s lives. Our annual Best of Health awards includes Mental Health Team/Worker of the Year, which in October was won by Portsmouth Mind.”

iMediaEthics has written to the Portsmouth News for further comment.

Depressed should ‘Stop Moaning?’ UK Paper Apologizes for Column saying ‘Bipolar seems to be all the rage’