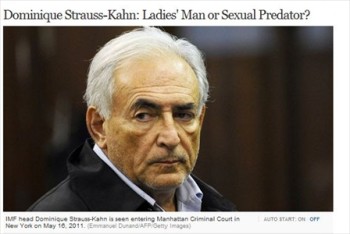 iMediaEthics is writing to ABC News about an ambiguous headline regarding the charges against Strauss-Kahn.

An ABC News story headlined “Dominique Strass-Kahn: Ladies’ Man or Sexual Predator?” appears to trivialize the charges by suggesting the criminal charges–without all the facts being in–may just be a close call.

Instead of just reporting the fact of the rape charge, the headline suggests that the charges may be in error, and that Strauss-Kahn is just a misunderstood “ladies’ man”

In the story, ABC News cites sex addiction “therapy agency” Sexual Recovery Institute director Rob Weiss’ comments that sex addicts don’t focus on “the consequences of their behavior” which also seems to let Strass-Kahn off the hook before the facts are known.