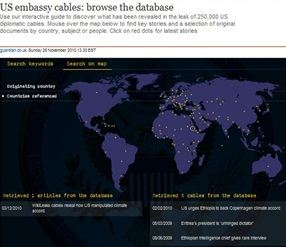 Banned Ethiopian journalist Eskinder Nega questioned if the above WikiLeaks cable featuring an interview with an Ethiopian intelligence chief was over-redacted. (Credit: Guardian)

iMediaEthics received an e-mail from a banned Ethiopian journalist last month complaining about the redactions news outlets made in a WikiLeaks cable. Redactions were suggested by the “Obama administration,” accepted by the New York Times, and passed on to other newspapers like The Guardian.

Nega is banned “from publishing a newspaper” and was accused – but later acquitted — of treason and other charges after participating in a 2005 demonstration “against alleged fraud in the parliamentary elections.”

The journalist, Eskinder Nega, asked if “the right of the non-western world’s public right to information [is] being addressed fairly by wikileaks and papers?” Nega further questioned if a WikiLeaks cable regarding Ethiopia was over-redacted.

Nega included a Dec. 14 e-mail to the New York Times asking why the Times made certain redactions on a WikiLeaks cable from June 2009 from Addis Ababa to the State Department.  Nega directed his e-mails to both the Times’ “Letters” editor and the Times’ Washington bureau chief.

According to Nega, “the excisions were suggested by the State Department through the New York Times.”

Nega criticized some of the redactions, but more so the newspapers for going along with it.  “While the stated rationale for involving the State Department before posting of  the leaked cables is acceptable,  the State Department is obviously—and understandably—demanding excisions that could not reasonably fall within the confines of the protection of its sources; at least in regard to a June 2009 cable from Ethiopia.”

According to Nega, the redactions were “excessive” in that particular cable.  “The majority consensus here in Addis Ababa, seat of the African Union, is that that excessive excisions were applied to the June 2009 US Embassy cable released last week. Ethiopians are profoundly disappointed, and hope that you will consider a revision of the excisions and re-release of an updated version,” Nega wrote to the Times.

Nega suggested iMediaEthics check out this article from what he called a “top-rated Ethiopian website based in the U.S.” that is banned in Ethiopia. The article, written by Nega for EthioMedia, repeated his criticism of the redactions from the cable.

Nega reported that he hadn’t had any response from the Times, but was hoping that attention from a media watchdog, like iMediaEthics, might help.  We asked if he’s contacted other newspapers that have had advance access to WikiLeaks’ documents. Nega wrote that he has written to The Guardian, but hasn’t had any response there as well.

He is seeking answers from the Times because they have been having direct contact with the U.S. State Department, Nega wrote.  “As principled publishers of the Pentagon Papers, our hope rests squarely with the NYT. Why is it refusing to address the issue?”

iMediaEthics conducted a search on The Guardian’s website for the WikiLeaks cables related to Ethiopia. We found five cables.

Nega confirmed that this is the cable that he calls excessively redacted.  The June 2009 cable contains an interview with Ethiopian intelligence chief Getachew Assefa.

We asked Nega why he thinks the redactions were made, and Nega responded:

“I think the state department is trying to protect the security chief from a major embarrassment, or even scandal. The role of security, which is supposed to be neutral, in stifling domestic dissent is controversial and troublesome. I really wonder if the state department is trying to forestall a potential Ethiopian Watergate. The Ethiopian government has been briefed about the FULL contents of the leaks in advance, thus the possibility that it could have some input in the suggestions of excisions. But this would not be surprising. The state department is doing its best—-as it should— to minimize the damage. One way to placate countries would be to involve them in the excisions.”

iMediaEthics wrote to both the Letters department of the New York TImes and Dean Baquet of the Washington bureau to confirm receipt of Nega’s e-mail and ask for comment.

“First off, no one has reached out to me. I’m on vacation. But charge we would protect their security chief is false, and rather silly. He should report and not speculate. Back to vacation.”

iMediaEthics asked Nega to send the e-mail again to Baquet and responded to Baquet Jan. 3, notifying him of such.  Neither iMediaEthics nor Nega has heard from the Times since.

Nega explained to iMediaEthics that he and his wife, Serkalem Fasil, were both banned from working as journalists in Ethiopia.  They were both imprisoned for a year and a half and then acquitted, according to Nega.  But, he explained that they “defy the ban by writing for US-based websites.”

An article attributed to Amnesty International posted on Ethiomedia’s website (see here) in 2006 explained that Nega was “one of the 76 journalists, human rights defenders and opposition political supporters currently on trial” in Addis Ababa.  Nega, former editor for newspaper Satenaw, was arrested in 2005 “following demonstrations against alleged fraud in the parliamentary elections of 15 May 2005” and was accused of treason, among other charges.

Fasil was “adopted” by Amnesty as “a prisoner of conscience,” The Guardian noted in a 2007 blog.  She gave birth “in a police hospital.”  The Guardian cited Amnesty as having said her cell was “infested with rats, cockroaches and fleas” (however, the Amnesty blog that The Guardian links to as a source is a dead link).