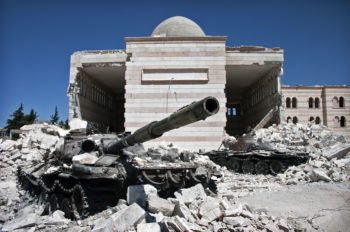 With the Obama administration contemplating an air strike against Syria for its alleged use of chemical weapons, several news stories have suggested the American public would be against such action. But, as usual, the polls that underlie these conclusions are highly misleading. The truth is the public is highly unengaged in the issue, and most people will almost certainly go along with whatever the administration decides to do.

I don’t mean to say most people will “support” administration actions, but rather that they will not strongly oppose them. Should the administration actually conduct air strikes, for example, it’s likely the polls will show a rallying-around-the-flag result, with a surge in the percentage of people who approve of the action.

But that result will be misleading as well, because the polls will almost certainly fail to measure intensity of opinion, just as they are doing now. Most people will continue to be unengaged on the issue.

One indication that the public is currently unengaged on U.S. intervention in Syria comes from the results of a Reuters/Ipsos poll, conducted Aug. 19-23. The poll shows that only 11% of Americans say they have heard a great deal about the current situation in Syria, with another 25% saying they’ve heard “a fair amount.” That leaves almost two-thirds (64%) of the public saying they’ve heard nothing at all about Syria (28%) or only “a little bit” (36%).

Despite the lack of engagement, the pollster is able to get about 70% of the respondents to come up with opinions on the issue, through the use of forced-choice questions (which provide the respondent no explicit “no opinion” option in the phrasing of the question).

Thus, for example, one question is phrased this way:

Note the lack of a tag line, that says: “Or don’t you have an opinion on this?”

The results of this question show 25% in favor of intervention, 46% opposed, and 29% who volunteer they don’t have an opinion.

These results are similar to a HuffPost/YouGov poll, conducted Aug. 26-27, showing 25% supporting an “air strikes to aid rebels in Syria,” 41% opposed, and 34% volunteering “not sure.”

That same poll shows about half the public engaged, saying they have heard “a lot” about the “ongoing violence in Syria,” and 51% saying they’ve heard “a little” (38%) or “nothing at all” (13%).

As I’ve previously suggested, polls that ignore intensity of opinion (to include non-opinion) give a misleading picture of the public. In the context of a poll, many people will come up with opinions because they know they are expected to do so. If pollsters want to know how deeply held are the opinions, they should measure intensity.

Indeed, the Reuters/Ipsos poll did measure intensity on one of its questions:

“As you may have heard, the Obama Administration decided last month to arm the anti-government rebels in Syria. Do you agree or disagree with this decision?”

Strong opinion against arming the rebels is three times greater than strong support (22%  to 7%), but 45% express weakly-held views (20% “somewhat” agree; 25% “somewhat” disagree), and another 26% say they don’t even lean in one direction or the other.

A more realistic picture of the public, then, is illustrated in the graph below:

While Reuters/Ipsos measured intensity on this question, the polling group did not measure intensity on the other measures of public opinion. But there can be little doubt that whatever the question on Syria, most people don’t have strong opinions one way or the other.

When taking weakly held views into account, we see more people leaning against any kind of intervention than leaning in favor. But these “leaners” can change views in an instant. That’s what makes “public opinion” polls appear so  volatile – and misleading.