Does Forbes Have a Habit of Stealing Photos? Balls Queens and Horses Oh My!

Does Forbes Have a Habit of Stealing Photos? Balls, Queens and Horses Oh My! 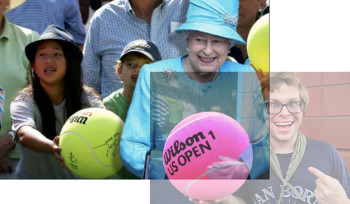 Forbes' image of the queen holding a pink US Open ball is a composite of 4 images, at least two from Getty Images. (Credit: Forbes.com, Getty Images)

It seems that this is not the first time Forbes.com has been accused of image theft. In a March, 2012 NY Post article Rick Samuels accused Forbes of lifting his photograph of the 2010 Breeders’ Cup winner Shared Account. Samuels claimed that while he was:

Samuels also purportedly said that Forbes Chief Content Officer Lewis DVorkin defended itself by saying “the company was not responsible for the contributing writer’s actions.”

In the case of the Queen’s photo Forbes did not make this same claim but that it was protected under fair use.

Another accusation is from 2007 when Boisterous Zooomr CEO Thomas Hawk blogged about the theft of one of his photos. In this case Forbes apologized and removed the image from the site but still did not offer payment for its use.

Perhaps photographers should make a habit of regularly checking Forbes.com for their work.

Forbes published a fake photo of Queen Elizabeth II without disclosing it was a photo illustration, as iMediaEthics wrote earlier this summer. Now we have learned that it has probably stolen one of the images it used to make the fake composite photograph and also appears to have possibly violated its license agreement with Getty Images.

Forbes’ phony photo shows Queen Elizabeth II holding a giant Wilson tennis ball at what appears to be a tennis match. The photo is a composite of four layers, the background, the Queen, the ball and the Queen’s hand. iMediaEthics has determined the origin of three of the parts.

The background photo is from Getty Images and shows fans waiting for autographs at the 2012 US Open.

The image of the queen comes from another Getty photograph, this one of Queen Elizabeth II leaving the Royal Maundy Day Service at Westminster Abbey on her 85th Birthday.

The Queen was cut out and flipped horizontally before being pasted into the Forbes image. A shadow was also created and added behind her.

The original image of the queen (on left) is cut and horizontally flipped before being pasted onto background and given a ball instead of flowers (on right). (Credit London Shearer Allen, photo illustration. Photo Credit: Forbes and Getty Images)

iMediaEthics asked Forbes to add a label that disclosed the image was a composite.  Forbes initially defended not doing so by stating it felt it was “readily apparent that the image was modified, in our view no caption is necessary.”

We then noticed that Forbes failed to give any credit to a photographer or photo agency and after a lengthy search (it turns out Queen Elizabeth owns many similar blue suits) we discovered the sources for three of the photos. So we went to Getty Images, the owner of the copyrights for the two of the four images.

Getty Images has specific policies about altering its images in its general license agreements. Outside of cropping and color correction, Getty bans it entirely:

Cole Porter, an editorial advisor for Getty Images, told iMediaEthics by email that Forbes should add a label. He wrote:

“Forbes is a subscriber and has language in their contract to restrict manipulation unless used in a photo Illustration. In my view the debate would be is this an obvious photo illustration and should it be labeled as one.”

iMediaEthics supports conforming with the industry standard that all photo illustrations should be disclosed. This ethical practice of transparency is even followed by the tabloids in the most obvious photo composites.

Porter again told iMediaEthics in a followup email that he “would like to see a label on it” despite agreeing that “it’s assumed the reader would recognize it ” as a photo illustration.

Ball, Ball, Who’s Got the Ball?

Is this Queen Elizabeth’s ball? iMediaEthics believes so. At least comedian John F. O’Donnell seems thrilled to hold a bright pink tennis ball at the 2012 US Open. (Credit: Brightest Young Things website appears to own this photo. No photo credit is is provided in their caption.)

iMediaEthics discovered the third photo above on the website Brightest Young Things, (BYT) after doing an extensive search. It’s a self-described “web magazine and event production/experiential marketing agency based in Washington, DC and NYC.” The image shows John F. O’Donnell, a New York comedian, at the 2012 US Open and was posted in a photo-heavy article on the tennis event.

Note below that the pink ball in the BYT photo is an exact match for the ball in the Forbes image. When you overlay the two images and scale for size, the white lines and black lettering match exactly. Although we have not done the math, we guestimate that chances of that being a coincidence in the ballpark of a billion to one against.

We have contacted Brightest Young Things for comment numerous times but have not received a response.

Perhaps, BYT’s own copyright violation scandals in the past made them demure from complaining to Forbes.  The site was accused of plagiarism a few months ago.

Bottom line in this case:  Forbes did not give photo credits to Getty Images for its two images, let alone to Bright Young Things, along with not being transparent about its image being a photo composite.

Animation demonstrates that the Forbes and Brightest Young Things images of the ball are a perfect match.  Would O’Donnell still be so happy if he knew his ball had been stolen? (Credit: Robert Slawinski)

So Where’s the Photo Credit?

As stated above, despite using at least two Getty images, there was no photo credit on its illustration.

“all Licensed Material used in an editorial context must include the following credit line adjacent to the Licensed Material: “[Photographer’s Name]/[Collection Name]/Getty Images” or as otherwise shown on the Getty Images website. If Licensee omits the credit, an additional fee in an amount up to one hundred percent (100%) of the License Fee may be payable by Licensee”

Yet Porter of Getty Images told iMediaEthics, “We do ask for credit on all our editorial images” when asked if a photograph should have a Getty Images photo credit when it is used as part of a photo illustration.

At first, Forbes ignored our original question regarding image credit but when questioned about lifting the BYT and Getty photos, Forbes responded and defended itself.

Forbes asserted that copyright law protected it from having to credit the coyright owner of the Images:

“Composite images like the one in question created by this Forbes.com contributor are routinely used for comedic purposes by nearly every major media outlet both on television, online and in print.  As transformative creations protected by fair use, they require no permission or authorization.   This is likely why we’ve received no complaints concerning this image.”

However, Forbes still caved but not because they have to, mind you. Forbes wrote: “Nevertheless, as a matter of courtesy, we have credited the source images to Getty.”

To put a finer point on it, “Transformative creations protected under fair use,” is a legal term and as with all copyright law is up for interpretation.  Many lawsuits have been filed over this issue. Newsday was sued for compositing several of stock photo company FPG’s images and reportedly settled out of court. The only way to determine for certain if Forbes‘ use is protected is to go to court.

But Forbes is probably fairly comfortable this won’t happen here. After all, Forbes is a paying client of Getty Images and BYT is a small company and web site, not likely in the financial position to launch an expensive lawsuit against Forbes.

So did Forbes properly credit the three images it used and finally disclose that this image is a photo composite? Nope. It completely left out any credit to BYT. Forbes only added a caption including Getty “(Credit for source images for photo illustration: Getty)”

After questioning Forbes about the BYT photo and Getty’s wish for photo credit, they added the caption above. (Credit screenshot Forbes.com)

Forbes continues to be silent on the issue of the BYT ball photo despite two more emails from iMediaEthics. The magazine seems to imply in its statement and outright says in its photo caption that all the images used to make the photo illustration come from Getty, but when directly asked if this is the case Forbes has refused to answer.

Extensive searches of Getty have not turned up a matching photo of the ball and, as demonstrated, the BYT ball is an exact match. Why does Forbes want to be courteous to Getty Images but not Brightest Young Things? Perhaps BYT is not important enough to Forbes.

It is hard to believe that Forbes would allow designers to go to any website, clip parts from photos they don’t own and use them with the claim of protection under fair use. Can Forbes legally cherry pick who it gives credit to or is it truly a Forbes policy that allows it to be “courteous” to some where it lifts photos and not to others?

The last of the four images used in the illustration is still a mystery. It’s of Queen Elizabeth II’s hand. We have not been able to locate it. This is what it looks like:

Close-up of Queen’s hand in the Forbes composite image. Can you find where it came from?

Perhaps you have seen this hand somewhere. Maybe it is from your photograph? (If it is yours, we will credit you even if Forbes won’t) If you have any information or think you know where this hand comes from, please let us know.

Does Forbes Have a Habit of Stealing Photos? Balls, Queens and Horses Oh My!