Media Matters and Media Bistro continue to be concerned with Howard Kurtz’s dual employment –at both The Washington Post and CNN.

Kurtz, after being called out for not disclosing both of his jobs, admitted in a June 17, 2009 article by Washington Post’s public editor Andrew Alexander, that his lack of disclosure was “an oversight and won’t be repeated.”

Media Matters originally cited  a June 15, 2009, online chat in which Kurtz, as a Post employee, “defended CNN from criticism” without disclosing that he works for CNN as well. Media Matters argued  Nov. 2, 2009, that “the biggest problem with Kurtz’s conflict of interest is not simply that it exists as a theoretical matter; it is that it clearly affects his actual reporting, despite his assertions to the contrary.”

And Media Matters notes, Kurtz has not kept his 2009 promise.

Media Matters listed several instances, after June 17, 2009, in which Kurtz, acting as a Washington Post employee, yet again, didn’t disclose that he also worked for CNN.

Media Matters wrote that Alexander had written (again) about Kurtz’s conflict of interest on Nov. 1, 2009.  Alexander admitted “Being paid by CNN presents an inescapable conflict that is at odds with Post rules.”

MediaBistro’s Fishbowl DC expressed concern about Kurtz‘s carry over of material from his CNN “Reliable Sources” program to his Washington Post column, or the reverse. Media Bistro highlighted Kurtz’s May 10 WaPo Media Notes column.  A section of the column took Kurtz’s CNN interview with Newsweek’s Jon Meacham  on “Reliable Sources.”

Kurtz, in his defense, told Media Bistro that he “almost never” takes information from one and uses it in the other, and that recently when he has, he’s asked his editor for the OK.

“In recent weeks I had two newsworthy interviews, one with Robert Gibbs and the other with Jon Meacham. In both cases I asked my editor if he wanted me to include some highlights as a secondary column item, and in both cases the answer was yes.  Lots of other Web sites picked up the Gibbs interview, but we waited eight days before mentioning it in the newspaper.

“As for the program, since we cover the week’s hot media issues, sometimes there’s a bit of overlap with what I’ve written, so in consultation with the producers, I sometimes mention information I’ve already reported so as not to artificially withhold it from CNN viewers”

Media Matters wrote that there’s probably no way to measure if Kurtz “routinely uses resources from one of his gigs to benefit the other unless of course you count his actual reporting on one outlet that benefits the other.”

But these two media sites aren’t the only ones that have expressed concerns about undisclosed conflicts of interest in Kurtz’s reporting.

The New York Times wrote May 29, 2008, that Kurtz’s interview of Kimberly Dozier on “Reliable Sources” May 25, 2008, was also a conflict of interest.  Kurtz’s wife had been a publicist for Dozier’s memoir Breathing the Fire.  Kurtz did disclose at the end of the interview, The New York Times noted, that his wife “has done some promotion work for Kim Dozier’s book.”  But, The New York Times reported Poynter Institute fellow Thomas Huang and scholar Roy Peter Clark questioning why CNN didn’t get someone else to interview Dozier.

“The interview would have had more credibility if somebody else had done it,” Clark had said in the New York Times article.

Kurtz’s page on The Washington Post Web site discloses that he also hosts the CNN program.  But, does the “Appearances” box listing his CNN program act more like promotion than disclosure? 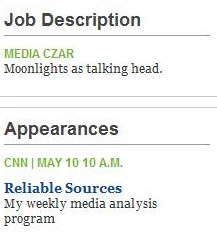 Howard Kurtz’s writer page on The Washington Post explains that he also works for CNN.  But, is the “Appearances” box on his page serving as disclosure or promotion for his “Reliable Sources” program?