Dr. Nancy Snyderman Back at NBC in November, Should she cover Ebola? Can sh 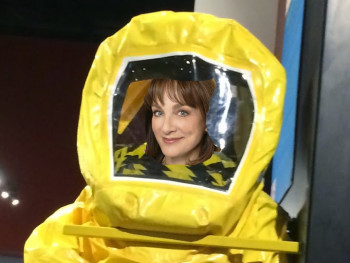 On Oct. 22, NBC News president Deborah Turness said Snyderman and the team were “healthy and symptom-free” after the 21-day quarantine and that they will return to the network in November, Media Bistro reported.

Rather than suspending or penalizing the team, Turness said in a memo cited by Media Bistro that the team is taking personal time.

“We have encouraged them – and they have agreed – to take some time off with their families and friends to help restore some normalcy to their lives,” Turness wrote.

NBC “emphasized that this move was not a suspension,” the New York Times reported . Further, the Times suggested NBC News proposed the team take personal time to “keep her out of the public eye until the Ebola crisis has subsided and other news has seized public attention.”

Snyderman, as iMediaEthics has written, was caught earlier this month in Princeton, NJ breaking a voluntary quarantine. In response, the New Jersey Department of Health instituted a mandatory quarantine. Snyderman issued a statement to NBC News acknowledging that “members of our group violated” the voluntary quarantine without admitting she was one of them. Snyderman and her team had been reporting from Liberia when one of the crew members, freelancer Ashoka Mukpo, contracted Ebola.  Mukpo tweeted that he’s unsure how he contracted Ebola.

For the record – no idea how I got it. It was something fluky. My best guess is I touched a surface and didn’t chlorinate fast enough.

Despite NBC News’ decision to bring Snyderman back, she faces much criticism.

Snyderman has been criticized for breaking the voluntary quarantine, especially since she is a medical professional.

Poynter’s Kelly McBride commented in an interview with the Associated Press that “People are so freaked out about Ebola that the problem NBC has now is that whenever they put her on the air, some news consumers are going to see the woman who put others at risk, rather than the reporter and professional with great experience.”

“The big problem now in journalism is when you become the story, and this team became the story,” he commented. “There are thousands of people covering it, but why did they have to become the story and, sort of posturing as they put their suits on and off and…scrubbed and whatnot out in West Africa, as if they were actually treating patients. So, by coming back and sort of grandstanding and saying, ‘Look, we are self-quarantining,’ they really put a target on their back.”

Likewise, Brian Stelter, the host of Reliable Sources, said in a separate report, that that Snyderman’s actions suggest she “just didn’t think she should abide by these rules.”

Stelter noted that her outing “doesn’t of course pose a dramatic risk to the community. But it does create fear.” Further, he added

“For the time being it goes to her credibility as the chief medical correspondent of the network to appear to be breaking a quarantine.”

Planet Princeton, the local blog in Princeton, NJ that broke the news that Snyderman was seen outside a restaurant in town violating her quarantine, reported, ” She has received more than 1,600 comments on Facebook since then, criticizing her actions, but has not posted any responses.”

And, there were signs posted around her town warning people of Snyderman’s quarantine in mid-October, the Times of Trenton reported. Picutres of the flyers, posted on Gawker, show the signs called for people to contact the “police and health officials” if they see Snyderman “breaking her quarantine before October 22.”

Cameraman who had Ebola: ‘Be Nice to’ Snyderman

Meanwhile, the cameraman, Mukpo, who is now Ebola-free, defended Snyderman on Twitter, the Times of Trenton reported.

His defense only suggests that she probably wouldn’t have gotten Ebola from him, and doesn’t speak to the fact she violated a quarantine instituted to protect the health of others. Below, read his tweets

Special shout out to Nancy Snyderman at NBC News. For the record me and her were never within 3 feet of each other once. Be nice to her plz.
— ashoka (@unkyoka) October 21, 2014

Nancy and I never rode in the same car, shook hands, or sat at the same table. I worried abt a few people’s health but not hers, ever.

Repeat: Never in proximity to Nancy. Dealt with producers and other cameramen. Self quarantined the instant I ran a temp.
— ashoka (@unkyoka) October 21, 2014

People weren’t shaking hands or touching in Monrovia as a point of extreme caution. I held to those rules like everyone else.

She was scheduled to speak at a Fort Wayne Community Schools event on Nov. 8 but canceled.

“Dr. Snyderman cancelled her appearance because she did not want to take focus off our event and message and turn it into a forum to discuss the Ebola crisis. We respected her decision and hope to be able to have her as a speaker in the future.”

iMediaEthics is reaching out to NBC News for comment.