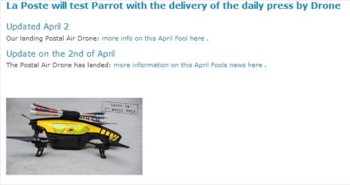 Parrot and La Poste published an April Fools joke that they were partnering to deliver newspapers by drone. (Credit: La Poste, screenshot)

Several news outlets were hoaxed by a story claiming that France would start using drones to deliver newspapers.

News outlets including Business Insider, the Washington Times and the Drudge Report posted stories about the drone newspaper carriers as fact.

The story originated from a news release published on the French mail service’s website. The news release reported that the mail service, La Poste Group, would start using a company called Parrot to use drones to deliver newspapers starting in March.

But, despite the numerous stories on the drone delivery system, did the media fact check the story with Parrot, the company listed as providing the drones?

Parrot’s Vanessa Loury confirmed to iMediaEthics by email today that the story indeed was an April Fool’s Day prank.

When asked if Parrot was surprised by the number of news outlets hoaxed by its prank story, Loury said:

“Yes, because media are usually suspicious  when they receive news couple of days before April1st 😉

“No ,because Parrot AR.Drone is the outcome of a dream and it is real. We think the ‘magic’ of the news -the project to have AR.Drone delivering newspapers- together with the credibility, ingenuity and dynamism of both Parrot and La Poste Group participated to make the news sound real.

“Sadly, this will remain a fiction… for the time being.”

Neither the San Francisco Chronicle’s March 31 story “Drones May Soon Deliver Your Newspaper In The French Province Of Auvergne” nor the Washington Times’s “France tries out drones for newspaper delivery” have updated or corrected. But, the Atlantic and Tech Crunch have both fessed up to the story being a phony.

The Atlantic reported on the story as if it were real, with a caveat that it certainly “seems like an April Fool’s joke with a French twist.”  Later, the Atlantic posted an update to its story admitting the story was an April Fool’s Day trick.  The Atlantic added that it’s “very sorry to the rest of you for the errors contained” in its story.

Tech Crunch “Drones will deliver the Morning Paper in France” now has a “note” disclosing the story was a prank. The note reads:

“Note: This is an April Fools joke, which suckered a lot of outlets, because it was not put out on April Fools day, but 3 day ago.”

NBC News, however, did appear to contact Parrot before publication and reported that the story was a joke, reporting “No newspaper delivery drones! French firm admits prank.”

Gawker and Mediaite both questioned if the story was a hoax or a marketing stunt, but neither story said the outlets attempted to fact check with Parrot.

Check out all of iMediaEthics’ stories on April Fools’ Day hoaxes.

UPDATE: 4/2/2013 10:15 AM EST: Parrot declined to comment on what media outlets contacted them to fact check the story.

Fast Company also fell for the hoax, but has since updated its story “Delivering Newspapers Via Drone” to disclose that the newspaper drone story was an April Fools’ Day trick.