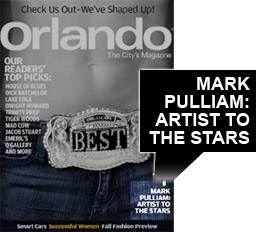 “Associate editor Jay Boyar’s profile of Pulliam described the artist as living a Zelig-like life, replete with celebrity encounters and a brief stint with the New York Yankees. Boyar’s story was based totally on Pulliam’s accounts and sources who knew him only as an artist or friend. Beyond verifying that he is a full-time artist, we did not independently corroborate many factual details in the story, a lapse in judgment that extends through the editing chain of command and ends with me.

“After the story was published, a reader alerted us that he believed Mark Pulliam, 49, hadn’t played Major League Baseball. A baseball encyclopedia did not list Pulliam’s name, this reader wrote in an e-mail to me. I immediately called the Yankees and the colleges Pulliam claimed to have attended as a student athlete.” » more