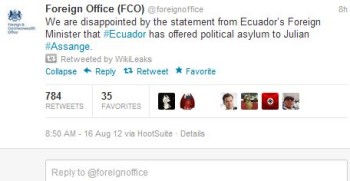 Ecuador’s foreign minister Ricardo Patino announced August 16 it would give Julian Assange asylum “because of the fears expressed by Mr. Assange, we believe that his fears are legitimate, and there are threats that he could face political persecution if the measures aren’t taken to avoid them,” the Washington Post reported.

The Associated Press added that Patino said the country “is convinced that his procedural rights have been violated.”

Despite the decision, the UK said it won’t “honor” the asylum, the Miami Herald reported.  The UK police plan to arrest Assange, who has been at the embassy since June, “once he’s off embassy grounds, complicating his transit from the embassy to the airport,” the Herald explained.

The Guardian’s live blog of the embassy decision news included a “full, translated version of the document presented to Ecuador by British diplomats.”  The document explains that the UK wouldn’t comply with Assange being given asylum, and reads in part:

“As we have previously set out, we must meet our legal obligations under the European Arrest Warrant Framework Decision and the Extradition Act 2003, to arrest Mr. Assange and extradite him to Sweden….But we must be absolutely clear this means that should we receive a request for safe passage for Mr. Assange, after granting asylum, this would be refused, in line with our legal obligations.”

According to that live blog, the Foreign Office then said in response to Ecuador’s decision:

“We are disappointed by the statement from Ecuador’s Foreign Minister that Ecuador has offered political asylum to Julian Assange.  Under our law, with Mr Assange having exhausted all options of appeal, the British authorities are under a binding obligation to extradite him to Sweden. We shall carry out that obligation. The Ecuadorian Government’s decision this afternoon does not change that.  We remain committed to a negotiated solution that allows us to carry out our obligations under the Extradition Act.”

The Washington Post noted that Assange “faces arrest the minute he steps foot out of the Ecuadoran Embassy for breaching one of the conditions of his bail.”

According to the Press Association, Assange called Ecuador’s decision a “significant victory for myself, and my people.”

Check out our timeline of events in Assange’s extradition battle.

iMediaEthics wrote earlier this year about McClatchy’s corrections of eight articles that claimed there were “charges” against Assange.  See our special investigation.