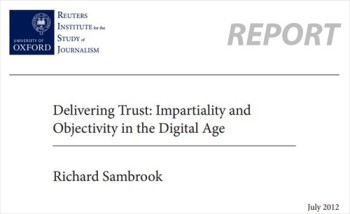 The importance of and problems relating to objectivity and impartiality were highlighted in a new report by the Reuters Institute for the Study of Journalism.

The report, “Delivering Trust; Impartiality and Objectivity in the Digital Age,” is by journalism professor and former BBC journalist and director Richard Sambrook.

Sambrook wrote: “The ideas of impartiality and objectivity — at the heart of serious news journalism for most of the last century — are now under pressure and even attack in the digital age.”

Sambrook distinguished between impartiality and objectivity, which he defined respectively as “absence of bias” and “identifying facts and evidence.”  Sambrook noted that “impartiality is a term more often used in the UK; objectivity is a more common term in the U.S.”

Further, he noted that the two ethical issues are “what separate journalism from propaganda, entertainment, or fiction.”

Sambrook questioned whether there should be new standards “for the digital age,” and outlined several “solutions to the trust-deficit in modern media” such as  transparency and standards.

Sambrook wrote about “objectivity in print journalism,” and argued that “the public are concerned with verification, but perhaps less concerned with opinion based upon accurate (as opposed to deliberately misleading) information.”

He also highlighted a variety of recent ethical discussions, including This American Life‘s retraction of Mike Daisey’s Apple monologue and the UK phone hacking scandal.

Sambrook called for “objectivity and the need for factual, evidence-based, journalism” over impartiality. He also “proposed solutions” to objectivity and impartiality problems, offering up “greater transparency, redefining objectivity, news codes of practice” and “new forms of regulation.”  In his conclusion, Sambrook wrote that “transparency alone … seems insufficient” as a way to help “ground journalism and help it serve its public purpose.” As an alternative, he proposed a combination of “evidence-led reporting,” “diversity of opinion,” and “transparency — about sources, interests, and intent, about methods and affiliations.”

Journalism.co.uk noted that the institute had a panel discussion on the same topic July 3.