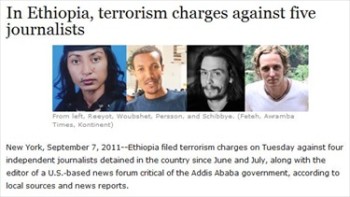 Several reporters in Ethiopia made the news this month for being arrested or charged with crimes. One, Argaw Ashine, reportedly claims that his interrogation was a result of being named in an unredacted WikiLeaks cable.  Another, Elias Kifle, is U.S.-based, and told iMediaEthics that the charges won’t apply to him here.

Read more about the cases below.

For example, Ethiopian reporter Argaw Ashine “fled the country after being named in a WikiLeaks cable,” according to the Guardian.

Agraw Ashine, the journalist who was named in a WikiLeaks cable, and later fled Ethiopia, was interrogated to learn who his source was for claims in the cable attributed to him, according to CPJ.

Ashine had stated that “an official source from GCAO” indicated Ethiopian “authorities” intended to “target” six journalists from Addis Neger to censor.  According to CPJ, almost two years ago the editors of Addis Neger “ceased publication and fled the country…citing fears of being silenced or prosecuted under a far-reaching antiterrorism law.”

The Guardian noted that “Ethiopian officials” have rejected Argaw’s account of events.

As StinkyJournalism has written, WikiLeaks suddenly published all of the diplomatic cables comprising the Cablegate leak without any redactions after a series of events led to the whole cache being leaked online unredacted. That publication was condemned by the news outlets that WikiLeaks called “media partners” when it first started publishing the documents late last year.

“No journalistic source is named or identified in the cable. Rather, Mr Ashine is mentioned, in passing, in relation to events in 2005 and 2006.

“Neither was Mr Ashine named by the CPJ in a list of journalistic related redactions processed by us.

“While it is outrageous for a journalist to feel the need to leave their country for a period, neither is it good for the CPJ to distort the facts for marketing purposes.”

WikiLeaks also called the Committee to Protect Journalists’ reports on the arrest “misleading.”

In response, CPJ stated that it “has no bone to pick with WikiLeaks.”  According to the CPJ, Ashine was named in “passing.”

“However, we believe that WikiLeaks has ultimate responsibility for any negative impact that accrues from the information entrusted to it,” CPJ’s Joel Simon stated.

Advocacy group the Committee to Protect Journalists reported that “Ethiopian security forces” arrested Sileshi Hagos.  Hagos is a former managing director of Change and current “contributor” to an Ethiopian radio station, Sept. 9.  Change “used to cover the banned political group Ginbot 7 before it was designated a terrorist organization” and is currently a “now-defunct political monthly magazine,” according to CPJ.

The Guardian noted that an unnamed “government spokesman” stated that Eskinder Nega was “arrested and accused of terrorism.”

Nega, who told iMediaEthics earlier this year he is a “banned” journalist in Ethiopia, was arrested Sept. 14, according to CPJ.  Nega and Hagos have been accused by state-run television as “harboring links with Ginbot 7.”

The AFP reported that Shimeles Kemal, a spokesperson for Ethiopia’s government, accused Nega and the four others arrested Sept. 15 as being “involved in staging a series of terrorist acts that would likely wreak havoc.”

iMediaEthics wrote in January about Nega’s e-mails to iMediaEthics. Nega, who noted he isn’t allowed to publish a newspaper in Ethiopia, questioned if WikiLeaks cables about Ethiopia were being over-redacted.  He had shown iMediaEthics his e-mails to the New York Times asking about certain redactions.

He told iMediaEthics that he thought “the [U.S.] state department is trying to protect the security chief from a major embarrassment,  or even a scandal…I really wonder if the state department is trying to forestall a potential Ethiopian Watergate.” Nega’s wife, Serkalem Fasil, is also considered a “banned journalist” in Ethiopia.  According to Amnesty International, Fasil was “adopted” as “a prisoner of conscience.” Read more here.

Charges against Elias Kifle, others

iMediaEthics wrote to Kifle for comment and to see if the charges affect him, as he lives in the United States. Kifle responded: “The terrorism charge by the ruling tribal junta in Ethiopia is part of their campaign to silence all voices of dissent. The ridiculous charge has no legal standing any where, but it is intended to terrorize critics of the regime like me. ”

UPDATE: 09/22/2011 6:54 PM EST: The Committee to Protect Journalists’ communications intern Christopher Moessner responded via e-mail to our earlier inquiry.  Moessner added the cases of two more journalists to the list.   He wrote:

“Additionally Eritrean journalists Saleh Idris Gama and Tesfalidet Kidane Tesfazghi are presumed held by the Ethiopian authorities, but Abdulsemed Mohammed and Haileyesus Worku have since been released on bail.  Please see the CPJ’s prison census for further details on imprisoned journalists [the census is updated yearly, hence the imprisoned status of Worku and Mohammed is outdated.”

He noted that Ashine “Argaw’s case is the only case worldwide we have been able to link to WikiLeaks in connection with the August cache of more than 200,000 confidential cables.”