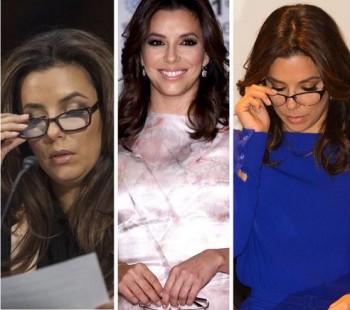 Eva Longoria called out the Sydney Morning Herald for criticizing her endorsement deal with Specsavers Australia.

The Sydney Morning Herald‘s Jenna Clarke wrote July 26, “The Goss: Why Eva Longoria’s shilling is shameful: Celebrities pretending to give impartial endorsements to things they have no interest in has gone too far.”

Clarke criticized Longoria’s endorsement claiming that it was “selling out” because she doesn’t wear glasses. “According to photographers that have been snapping her for close to 15 years – she doesn’t wear spectacles,” Clarke wrote.

Clarke said she searched for images of Longoria wearing glasses and only found two photos, even though Longoria’s reps said she wears them for reading.

“I decided to investigate further and found myself in some scary places on the net, commonly referred to as Pinterest, and all I could find were two photos of her ever spotted wearing glasses outside the house, oh and the few occasions she was seen looking uncomfortable and unsteady wearing a pair around Sydney this week. However a representative stressed she has worn glasses…for reading…for the last four years.”

Then Clarke goes on to criticize Longoria’s endorsements in general, saying she “is a serial offender when it comes to selling out in a not so subtle way,” citing Longoria’s deal with L’Oreal and Sheba cat food.

Longoria took to Twitter to call out Clarke for not fact checking. She included images of her using glasses to read.

In an “open letter” on Twitter, Longoria wrote to Clarke, “If you had done your journalistic duty (it’s actually not that hard, a more thorough google job, or one phone call to my camp and they could have provided you any documentation) you would see that I have been wearing READING glasses since May 3, 2013. Long before Specsavers @specsaversaustralia called me.”

She said she found out May 3, 2013 she needed glasses when she experienced problems reading and bought five pairs of glasses with a prescription.

“The reason your lazy journalist research of ‘googling’ didn’t turn up more pictures of me on the ‘red carpet’ is because I don’t need glasses to see far, only to READ,” she added. “So unless you are in bed with me at night, or in the morning at my breakfast table reading the morning newspaper, then you probably won’t find a ‘paparazzi’ shot of me.”

She went on, “And sorry I haven’t worn glasses on a ‘red carpet’ Jenna, but shockingly I am not usually READING a book on the red carpet! We have plenty of photos to show you of me USING READING GLASSES like when I testified in Congress” and when she had to read at a press conference.

“So next time you want to write an article calling someone ‘shameful’ why don’t you do your research because that is your responsibility as a ‘journalist’ and the Sydney Morning Herald should hold you to that ‘high’ standard even though you are just the Lifestyle journalist.”

iMediaEthics wrote to Clarke but received an auto response she is away from the office until July 29. We’ve also reached out to the Sydney Morning Herald.