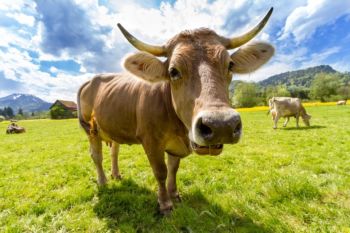 Lions and tigers and bears, oh my! (But for the purposes of this article, cows, sheep and goats). Three news outlets in recent months erred in describing animal-related information in news stories or photo captions. iMediaEthics typically collects entertaining or unusual corrections every few weeks, but here’s a special animal-related edition.

1. The New York Times called a sheep a goat in a photo caption. Amusingly, MSNBC’s Jonathan Wald asked on Twitter, “which one called” to complain about the error?

“A picture caption with an article last Sunday about style in Dakar, Senegal, misidentified the animal pictured. It is a sheep, not a goat.”

“The cows and heifers correction was published in print in our Oct. 24 editions. It appeared on Page 2A in our usual spot for corrections and clarifications,” he e-mailed iMediaEthics. “I don’t recall the numbers of complaints but we did hear from a few folks about it.”

“In a story about raw milk farmers on Page 1A Saturday, we described cows headed to a milking machine as heifers. We can apologize til the cows come home, but our friends who’ve spent more time on farms may never let us city slickers live this one down. As they pointed out in calls and emails, a heifer is a young cow that has not yet given birth and produced milk.”

3. In a third animal-related snafu, The Economist mixed up ovine and ovicular in an August review of a book on puns. The article, “Why English is such a great language for puns,” reviewed the book “Away with Words: An Irreverent Tour Through the World of Pun Competitions.

“Correction (August 15th, 2017): As many commenters and letter-writers have pointed out, ‘ovine’ means relating to sheep, not eggs. The correct word is ovicular. This has been amended. Apologies for the woolly thinking.”