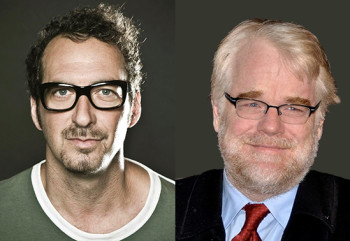 David Bar Katz is suing the National Enquirer over its current Feb. 17 cover story claiming he and Philip Seymour Hoffman were lovers and that he saw the actor taking cocaine and heroin. Katz, a playwright and friend of Hoffman, found Hoffman dead Feb. 2.

His libel lawsuit asks for $50 million and claims that the Enquirer made the story up, E Online reported.

The lawsuit calls the article “one of the most reprehensible examples of yellow journalism.” It goes on, “The story is a complete fabrication: There was no interview. Katz has never spoke to anyone at the Enquirer about Hoffman.”

The Enquirer has since published “a correction and an apology” to Katz on its website. “We believe we were tricked,” the statement claims. The Feb. 7 statement says that the Enquirer was duped by someone posing as Katz and apologized to the families of Hoffman and Katz.

According to the statement, a “veteran Enquirer reporter spoke at length with someone who identified himself as David Katz, and he had reason to believe he was indeed speaking with Mr. Katz.”  The statement goes on to express “regret” and admit error:

“The National Enquirer takes pride in providing our loyal readers with timely and accurate news. In this instance, we wish simply to say that we were wrong.”

Katz’s lawyer, Judd Burstein, told iMediaEthics by e-mail that the statement “was not part of any settlement.”

iMediaEthics has asked the Enquirer how it tried to verify the identity of the source who posed as Katz. We’ll update with any response.

The National Enquirer’s Feb. 17 story said that Katz and Hoffman were lovers, and that Katz saw Hoffman “freebasing cocaine the night before he died.”

According to Philly.com, the article included quotations attributed to Katz saying

“We were homosexual lovers. We had a relationship…”

“We were planning to go to the Super Bowl together and have a really nice day. This is so terrible.”

“I was Philip Seymour Hoffman’s gay lover and saw him freebasing cocaine the night before he died.”

Given the Enquirer’s correction and apology statement, those quotes are confirmed as fake.

The lawsuit, published by The Hollywood Reporter, accuses the Enquirer of making up an interview with Katz. Katz “unquestionably has not spoken to [the Enquirer reporters] or anyone else from the Enquirer since Hoffman’s death.”

The lawsuit goes on to deny the claims the Enquirer made, saying that Katz “(a) never had a homosexual relationship or encounter with Hoffman ever, (b) never witnessed Hoffman using heroin, let alone ‘regularly,’ (c) never saw Hoffman freebasing cocaine at any time ever, let alone the night before Hoffman’s death.”

“Here you have Phil’s family and his friends grieving, and the Enquirer comes along seeking to make a buck through putrid lies,” he is quoted as saying. “Worse still, it appears that the Enquirer sent out a press release hyping the story so that it could sell more copies of the magazine. I do not know how these people can sleep at night.”

The Daily Telegraph in Australia headlined an online story about Hoffman’s dead “Kids grieve for junkie actor dad.” The headline was changed, but not before numerous readers and at least two Australian media sites slammed the Telegraph for bad taste. Australia’s Press Council told iMediaEthics that it received complaints over the headline.