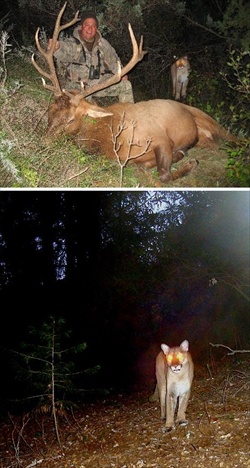 JUDGE FOR YOURSELF: See top the photo dubbed a composite Photoshop image, and below the "original" photo. (Credit: Lewiston Tribune Online)

The Lewiston Tribune Online reported that a photo of an “elk hunter posing in the dark with his newly downed elk” has been circulated on social media. In the background of the picture is a mountain lion. (The Lewiston Tribune is the website for a newspaper of the same name in Idaho and Washington.)

However, the caption is incorrect and the photo is fake, The Lewiston Tribune determined.

The original caption explains that “the hunter downed the elk” and took the photo of himself with a self-timer. However, The Lewiston Tribune reported that the “cougar” in the background is from another photo.

Snopes also weighed in on the photo, deeming it a fake and tracing the mountain lion image to this 2008 photo on the blog Camera Trap Codger.

“We don’t know the identity of the hunter pictured above with a downed elk, but the backstory that acompanies this image … is false,” Snopes wrote.  “The image is a composite; the original photograph of the mountain lion was taken by a wildlife biologist in California in February 2008 and shows no trace of hunter or elk.”

The photo has been discussed in forums like BowHunting, Addicted to Hunting, and Texas Hunting Works.