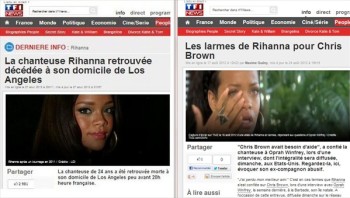 See above a comparison of the fake photo and story (left) with an actual story on TF1's site about Rihanna (right). (Credit: Gossip Cop, TF1, screenshots)

A “photoshopped fake article” purporting to be from France’s TF1 and claiming that Rihanna died from a heart attack is circulating, Gossip Cop reported.

The fake article, “La chanteuse #Rihanna retrouvée décédée à son domicile de Los Angeles” closely mirrors TF1’s real site.  See above a side-by-side comparison of the fake article next to a real article about Rihanna on TF1’s site. The fake screenshot uses the same design as a regular TF1 article.  La Nouvel Observateur reported that the rumor was spread around Aug. 27 and 28.

TF1 denied reporting the story, writing that “this information is false,” “this screenshot is false,” and “TF1 News has released no information to that effect.”

TF1 added, according to a Google translate of its report:

“TF1 News is required to provide the utmost care to verify the information it disseminates.  TF1 News regrets the one hand, the indecency of such a rumor about the death of a personality and is aggrieved by the person or persons who made the false, or relayed by suggesting that TF1 News was near or far related to this rumor.”

Huffington Post France and several other sites pointed to tweeter, “Seb la Frite,” as having started the rumor.  That user started tweeting “OMG #RihannaEstMorte” as early as August 26, and tweeted numerous times saying so.  His Twitter bio reads, according to Google Translate: “I’m a fry. I’m nice. I make videos. I tweet. I also con … a little … but not too ..”

We’ve previously written about France’s TF1 when earlier this summer if defended publishing “a leaked recording of conversations between police and Mohamed Merah,” who killed seven people in France.

Check out all our stories on Rihanna.