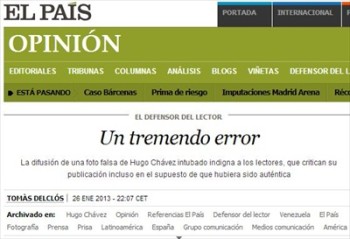 El Pais ombudsman Tomàs Delclós has responded to the newspaper’s high-profile failure in publishing a fake photo purporting to be of Hugo Chavez.

As iMediaEthics wrote, the Spanish newspaper apologized for publishing the phony photo that appears to be a screenshot from a 2008 YouTube video. The Associated Press has since reported that a Mexico City anesthesiologist, Dr. Juan Mandujano Guajardo, claims he treated the man who was pictured. El Pais took down the online version of the photo and pulled the newspapers with the print version of the photo from stands. The photo would have been especially newsworthy since Chavez has had surgery for cancer.  Venezuela’s government has also called for a lawsuit against El Pais over the photo error.

iMediaEthics had asked Delclós about the photo’s publication, any pending lawsuits, attempts to verify the photo, and how the paper learned of the error, but he told iMediaEthics by email Jan. 29 that he doesn’t “make declarations about the cases that I have investigated” and pointed us to his recently published comments on the photo.  In his Jan. 26 column, published in Spanish and accessed by iMediaEthics through a (rough) Google translate, Delclós called the photo’s publication “a huge mistake” and called for El Pais “to establish new verification protocols to … prevent the recurrence of such unfortunate mistakes.”

He noted that El Pais “has worked several times with no problems” with the photo’s source, Gtres Online, and indicated that the paper learned that photo wasn’t real after “several netizens had reported on Twitter.”

Delclós quoted the newpsaper’s editor Javier Moreno’s explanation on the photo’s publication including that he had  “two journalists from the newspaper, José María Irujo and Joseba Elola” conduct a “thorough investigation into what happened.”  Moreno added that a “mistake” El Pais made was in counting on Gtres to ensure the photo was legitimate.

Outside of the photo’s accuracy, Delclós  commented on the privacy aspects of the photo and “accusations of double standards” claiming El Pais wouldn’t run the same photo of a “European president.” He explained:

“Another legitimate debate is whether the photo, even if true, should have been published.”

But, Delclós argued that because Chavez and the status of his health aren’t currently publicized to Venezuelans, the photo was in the public interest.

In his email to iMediaEthics declining comment, Delclós also pointed to El Pais’ Jan. 26 news article about the error, which was called “one of the biggest mistakes in its history.”

That article reported on the back and forth within the newspaper before deciding to buy and publish the photo, including questions about the photo’s authenticity and accuracy. And, according to that report, before El Pais retracted the print issues of the paper with the fake photo on the front page, “A total of 22,635 copies with fake photo [were] distributed.”