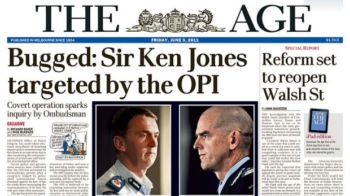 A front page of the Age

Two years ago, one of Australia’s most controversial writers, playwright Barry Dickins, concocted a story for The Sunday Age, a daily newspaper in Melbourne.

In this journalistic drama, Dickins claimed that two Victoria police officers approached him, saying he matched the description for someone who stole a T-shirt from Kmart. “The policewoman then quickly squatted with a camera and told me to take down my pants to check whether the stolen T-shirt was hidden there,” Dickins wrote, adding the officer then told him “to drop my underpants” and took pictures of “my public hair” and “my worn out old bum.”

To possibly sweeten the plot, Dickins filed a police report over the alleged incident just before his article was published. Alas, reality stepped in. Within a week of the article’s publication, the Victoria police complained, noting that the Age never contacted them for comment. And, it turned out that Dickins had made up the story. And, in this story’s last act, the Magistrates’ Court of Victoria found Dickins guilty of a false report in March 2017.

As the Age itself reported, “Dickins was placed on a 12-month good behaviour bond, with no conviction recorded.”

What was the responsibility of The Sunday Age in this case from the outset of this drama?  Dickins was, Australian media site Mumbrella noted, a “regular contributor to the newspaper.” And yet, the Age has never published a correction or apology for the article, though the article was removed from the newspaper’s website after the police complained. That wasn’t enough, the Australian Press Council ruled.

The Age argued that the newspaper was in the clear because it had deleted the article from its website and published a June 2017 news story on Dickins’ guilty verdict.

However, given “the serious nature” of Dickins’ claims, the Age should have contacted the police for a response before publication, the press council ruled. The press council also rejected the Age‘s argument that its follow-up story on Dickins’ verdict sufficed as a correction. “The article in June 2017, which did not identify or acknowledge the inaccuracies in the original article, does not constitute adequate remedial action,” the press council ruled, calling for the Age to “publish a correction and apology.”

iMediaEthics wrote to the Age to ask if and when it will publish a correction and apology, if Dickins is still writing for the Age and if Dickins explained why he fabricated the story. The Age told iMediaEthics it has published an apology and that, “Barry Dickins was an occasional contributor at the time of the article and has not written anything for us since.”

We’ve also contacted the Victoria Police to ask if it is satisfied by the ruling.

A copy of Dickins’ original October 2015 article is published on JulianBurnside.com.au.