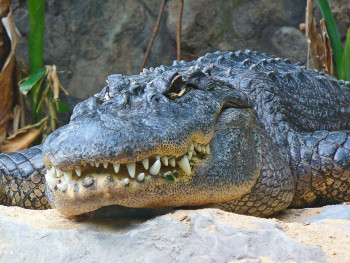 A viral news story circulating earlier this month claiming a Florida man had sex with an alligator and ended in jail is, of course, fake, the Washington Post reported.

“Sure: If an incident like this were to happen, it would happen in Florida,” the Post commented. “But in that case, one presumes it would’ve been reported by an actual news outlet — and not a site by the name ‘Thug Virals.’

The story apparently originated on ThugVirals.com before making its way to your social media feeds. It claimed a 59-year-old fisherman had a “12 foot alligator tied and blindfold for the last month, sexually assaulting the reptile multiple times a day.”

The story claimed a witness overheard the man having sex with the alligator and saying “next time you try to kill a man, you best get the job done. Now you’re my bitch forever.” Further, the alleged alligator kidnapper and rapist was reportedly arrested by Collier County sheriffs, ThugVirals.com said.

The sheriff’s office posted on Facebook that the story was bogus, writing the story is “as fake as crocodile tears.”

Hey everyone – this story seems to be gaining traction on social media, but don’t believe it. It’s as fake as crocodile tears. http://thugvirals.com/florida-man-arrested-for-having-sex-with-an-alligator/

Commenters pointed out that the mugshot ThugsViral.com used with its alligator sex story is a mugshot from a 2013 story from real news outlets including NBC Chicago about a man arrested for sexually abusing a peacock.

A quick look at ThugVirals’ homepage would warn readers to be skeptical, iMediaEthics notes, as recent headlines include: