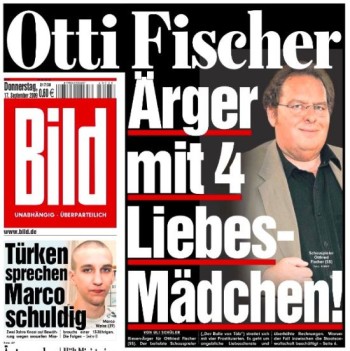 A journalist who paid for a sex video showing a top German actor in bed with two prostitutes has been acquitted of coercion charges that could have seen him jailed.

Die Zeit Online reported that journalist Wolf-Ulrich Schuler, who worked for the Hamburg-based tabloid Bild—the sixth largest-circulating newspaper in the world—had been offered the video in 2009 and agreed to pay 3,500 Euros for a copy.

The video, which showed Bavarian-born actor Ottfried Fischer, 59 romping with the two women in a brothel in Hamburg’s red light district, was filmed without his knowledge. An unnamed source from the red light district offered the video to Schuler, according to Die Zeit Online.

Fischer is arguably one of Germany’s top stars for his performances as Benno Berghammer in the German TV series The Policeman from Tolz (Der Bulle von Tölz) and as the German version of Father Brown (Pfarrer Braun) based on the books by the English novelist G. K. Chesterton.

He has also been a popular subject with the country’s tabloid media because of his colourful love life and, until the sex tapes surfaced, he did not seem to be shy about talking to newspapers.

German newspaper The Welt in an article said that while women seemed to be one of the great weaknesses of Fischer, talking to the media was clearly another.

The article pointed out how he had been happy to talk about his failed marriage, his love affairs and his trips to the red light district – and finally his battle with Parkinson’s disease that forced him to give up his acting career. Headlines based on his interviews such as “Please Take Me Back” in an open message to his wife when she left him were not uncommon.

But his open relationship with the press changed when the journalist from Bild was offered a video that showed Fischer in bed with the two prostitutes.

Spiegel Online reported that resulted in a telephone call between the reporter, Schuler, and Fischer’s press agent of the time, a 59-year-old Hamburg woman whose identity is protected by Germany’s privacy laws because she is not involved in any of the legal actions.

Schuler claimed that he had repeatedly stressed that the video, which the court heard was purchased for 3,500 Euros, was “far too hot” (Schuler’s words) for Bild to publish. Despite that, Fischer’s press agent explained to his lawyers that he should do an exclusive interview with Bild or that it could mean the end of his career were it to get out, Spiegel Online stated.

According to Spiegel Online, the press agent explained to Fischer’s lawyers that she had wanted to start a positive image campaign for the star and wanted to see the matter of the sex tapes dealt with before going forward.

As a result he met the reporter and gave the interview.

But a few weeks later, Fischer suddenly decided that what had happened amounted to nothing more than coercion and was extremely invasive and damaging to his private life – and he got his lawyers involved.

A formal complaint to the police in Munich, Spiegel Online stated, resulted in a criminal case against Schuler, who was charged with coercion and illegal possession and usage of picture / video information.

Schuler’s lawyer, Prof. Dr Ulrich Ziegert, told iMediaEthics: “At the start there were others involved on the prosecution case, such as those involved in taking the secret film. But they all did a deal with the prosecution that resulted in the journalist standing alone in the dock on the charge of coercion. One is left with the feeling that the agenda all along was to get Bild newspaper.

“The prosecution, for example, felt that it could bring charges against a journalist for using the footage even if they never published it. They argued that simply possession was enough to justify usage. The act of calling up and saying ‘I have it’ is usage – and it is also a threat.”

“But what we argued and what the court accepted is that basic freedom of the press is guaranteed in the German constitution, and that includes the freedom of the journalist to do research. We have a great many offers of material many of which turn out to be false or incorrect and sometimes it is necessary simply to get your hands on that material in order to check it for authenticity. Sometimes that means buying the information. It is also the duty of the journalist to confront anybody involved with material like this with the evidence and to give them the chance to say something against it. Ruling that this counts as coercion is an attack on one of the basic journalistic principles. The Right to reply.”

As mentioned by Spiegel Online, the legal case against Schuler took place at the district court in Munich in October 2010 and ended with the journalist being fined 14,400 Euros.

But the verdict was not accepted by Axel Springer AG, publisher of Bild, which argued that the ruling would cause all sorts of problems for journalists in the future.

According to Spiegel Online, they appealed to the regional criminal court, the Landesgericht (LG) München in Munich, in May 2011, which agreed and ordered the convictions quashed.

In her decision, Judge Susanne Hemmerich recorded a not guilty verdict against the journalist on all points.

Hemmerich not only criticized prosecutors for bringing the case but also criticized the way the first court hearing was carried out, and said that the journalist had done a professional job. She said: “He did exactly that what journalists basically do. There is no way to make any allegations out of that.”

The judge also accepted that purchasing the video was necessary for the journalist’s research and if that was no longer possible, then journalists might “just as well pack up and go home,” mentioned Spiegel Online.

Ziegert, speaking after the ruling in the second instance, described it as a clear decision for the freedom of the press and criticised other media that had taken up and supported the prosecutors without actually checking the facts or what the consequences would be for other journalists. He said journalists would not just be obstructed but would actually be criminalized if the ruling had been allowed to go ahead.

But the LG ruling was not accepted by Ottfried Fischer or prosecutors who took the case to the next court of appeal, the Munich High Court (OLG). This third hearing, in April 2012, overturned the not guilty verdict from the LG because of procedural errors, Die Zeit Online said.

Spiegel Online reported that they ordered it back to the LG München and the case, the fourth instance, was heard last week on 24 January in an 11-hour session. The LG was asked to consider whether it was a criminal offence to buy research material such as in this case a sex video and also how to assess what the consequences are of the possession of such material.

The prosecutors were backed up in each case by the actor’s own legal team who were also allowed to be involved in the case because the actor was directly affected by the alleged criminal activity.

Media specialist Spyros Aroukatos, who acted for the journalist in the fourth hearing, argued that not only was it not coercion – but in fact it was “the obligation of the accused to agree to accept the video when it was offered,” reported Die Zeit.

And an expert report by the vice president of the German Constitutional Court Professor Winfried Hassemer handed to the court confirmed that it was part of the professional duty of a journalist to confront somebody affected by ‘explosive material’ with the fact that it existed, said Die Berliner Zeitung.

According to Spiegel Online, the court agreed and ordered that the journalist be found not guilty of coalition or illegal possession of the material, rejecting the prosecution argument that the existence of such a sex video in the hands of the journalist amounted to coercion.

Fischer’s lawyer Christoph Knauer had said: “If somebody bursts into a bank wearing a balaclava, then it’s obvious what that person wants.”

Knauer also claimed that it had been wrong of Bild to take the case and make it into an issue about press freedom, arguing that it was a clear-cut case of coercion, which is a criminal offence.

He said that even with journalistic research people still needed their free will. Judge Thomas Hensel, however, said it was not proven that free will had been taken away.

Fischer maintained that he feared about his future when he heard about the sex video. According to the Spiegel Online interview, he said: “I felt people would always associate me with prostitutes.”

The court did not hear from the person in the red light business who supplied the video—they failed to show up in court—but Fischer’s former press agent did tell the court that the Bild interview had nothing to do with the fact that the sex video existed.

Although the court cleared the journalist, the judge ruled that what happened “was nevertheless a disgrace. It is absolutely to be expected that the actor felt furious, angry and left with a strong feeling of injustice.” But there was, he said, also the principle of individual guilt and that had not been proven.

The newspaper’s legal adviser Karina Hesse told iMediaEthics: “This case has been hanging over the journalist’s head for three long years. They wanted to see him jailed for simply doing his job. He had his house searched and they demanded details of his telephone bills and also took his telephone. As you know, with a smart phone you can even get somebody’s emails. They were also able to see his text messages.”

“It is an enormous relief that it has been thrown out and he has been cleared and we hope that this will now be the end of the matter although they can of course go on to make a further appeal,” said Hesse.

According to Spiegel Online, Prof. Ziegert said that he understood prosecutors were currently studying the written decision before deciding whether to make a final appeal to the OLG Munich which would mean it was the fifth time that the case had been before court. But he said that he hoped they would see sense now and drop the matter.

iMediaEthics contacted German media lawyer Philip Jakober, who said: “Freedom of the press is dealt with in Germany under article 5 but it doesn’t really come into this case because the court case was never really about the contents of the interview, but more to do with the circumstances under which the interview with the actor Ottfried Fischer came about.

“That means it is simply the question of whether a threat from the journalist was ever made to Herr Fischer. And in this case the alleged threat of a publication of the sex video was never confirmed – in fact, it was quite the opposite as, according to the former agent, there was never any suggestion that the video would be published if no interview was given,” said Jakober.