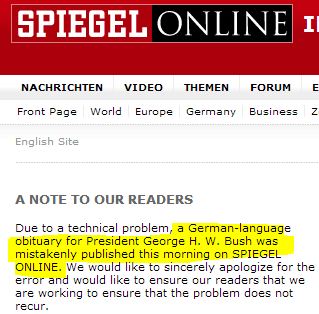 Der Spiegel apologized after reporting former U.S. president George H. W. Bush had died.  Bush has been in the hospital recently but just “moved from the intensive care unit to a regular patient room,” the Guardian noted Bush’s spokesperson said.

The German-language obituary for Bush called him a “colorless politician,” and was published “only for a few minutes,” according to the Daily Mail .

Der Spiegel tweeted that it was a “technical mistake,” and commented that “all newsrooms prepare obituaries for selected figures,” the AP noted.  It also put a note on its website writing:

“Due to a technical problem, a German-language obituary for President George H. W. Bush was mistakenly published this morning on SPIEGEL ONLINE. We would like to sincerely apologize for the error and would like to ensure our readers that we are working to ensure that the problem does not recur.”

According to the Weekly Standard, the obituary was unpublished and the link to the story goes to a “Document not found” page.

Last year, the Washington Post accidentally posted a dummy version of an obituary for writer Christopher Hitchens, who had actually died.  The obituary read in part (emphasis ours):

“Christopher Hitchens, a sharp-witted provocateur who used his formidable learning, biting wit and muscular prose style to skewer what he considered high-placed hypocrites, craven lackeys of the right and left, ‘Islamic fascists’ and religious faith of any kind, died … cause, place of death. He was 62. He had cancer of the esophagus.”

Despite a screenshot of that version of the obituary being circulated and getting tons of attention, the Post‘s ombudsman Patrick Pexton explained to iMediaEthics at the time that “the error was corrected within three minutes.”

And, earlier this year, news outlets wrongly reported that former Penn State football coach Joe Paterno had died on Jan. 21.  While Paterno did die the next day, outlets including CBS Sports, People, Huffington Post, the Guardian, and the Star-Ledger all erred in reporting Paterno’s death before it happened.