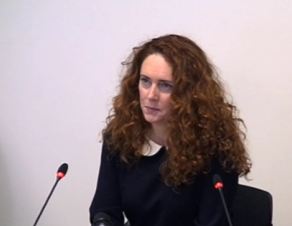 Brooks was editor of the Sun from 2003 to 2009 and the News of the World from 2000 to 2003.  She has been arrested twice in the past year related to the UK police investigation into “corruptions and phone hacking” and  “suspicion of conspiracy to pervert the course of justice,” and the Guardian noted that she is on bail.

The UK Guardian noted that her testimony at the Leveson Inquiry “will be the first time Brooks has made any public statement since 19 July 2011, when she gave evidence to the Commons culture, media and sport select committee on phone hacking.”  See our report on that testimony here.

On the relationship between the press and politicians, Brooks is quoted by the Guardian as saying:

The Guardian also listed here some of Brooks’ meetings with politicians that came up during the inquiry.

Brooks said, according to the Guardian, that she “had no involvement” with the Sun’s 2006 report on Gordon Brown’s son’s cystic fibrosis.  As we wrote last year, Brown, a former prime minister, questioned in 2011 if the Sun illegally used his family’s medical records to report that his son had cystic fibrosis.  The Sun denied the claims and said it had been tipped off to the story by “a member of the public whose family has also experienced cystic fibrosis.”

According to the Guardian’s live blog, Brooks said the Browns were OK with the Sun running the story, that she “spoke to the Browns” about it, and that she and and Sarah Brown “were good friends.”  Likewise, last month, News Corp CEO Rupert Murdoch told the Leveson Inquiry that Brooks had contacted Sarah Brown, Gordon Brown’s wife, prior to publishing the report on the Browns’ son.

Brooks also answered questions about News of the World’s Sarah’s Law to identify sex offenders.  She said that “it was news to me that convicted paedophiles of that nature were allowed to live unchecked in the community and parents didn’t have any information” so the newspaper backed a call for more “access to information about paedophiles living locally,” according to the Guardian’s live blog of her testimony and a 2011 report on Sarah’s Law.

Sarah’s Law was prompted by the 2000 kidnapping and murder of 8-year-old Sarah Payne, according to the Guardian’s 2011 report.  Brooks as News of the World editor launched her “first major campaign as a national newspaper editor” for the law and her campaign was “arguably the most famous in the News of the World’s long history.”  The newspaper “adopted a policy of ‘naming and shaming’  known sex offenders,”  the Guardian reported last year.

According to the Guardian’s live blog, “two people suffered vigilante attacks” because of the News of the World identifications, but Brooks said “I don’t think anyone could have predicted the paediatrician situation. I didn’t predict the outcome.”