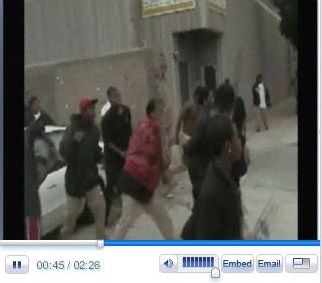 SHOULD THE PUBLIC SEE THIS? Screen capture from violent video that documents how 16-year-old Derrion Albert was beaten to death outside a community center in Chicago.

On Thursday, September 24, 2009, 16-year-old Derrion Albert was beaten to death outside a community center in Chicago’s Far South Side neighborhood of Roseland.

The motivation behind Albert’s death remains murky — most reports claim that he was simply caught in the middle of a fight involving dozens of students from nearby Fenger High School, apparently members of two rival gangs. But what made this incident — in an area plagued by high crime rates — particularly disturbing was a cell-phone video of the fight, shot at close range, documenting Albert’s death.

The video first aired on Chicago’s WFLD-TV, a Fox affiliate, the Saturday after the beating. To quell concerns that airing the video might be interpreted as a shameful ratings grab, FOX Chicago News’ vice president and news director Carol Fowler later wrote an essay detailing the station’s decision to show the video during their Saturday broadcast.

In her piece, Fowler explains how the station obtained the video when assignment reporter Darlene Hill was approached late Friday afternoon by the videographer, someone whose sister attends Fenger and wanted to sell the tape to the station. The demand for money didn’t phase Fowler, who was primarily concerned with the video’s authenticity. After Hill viewed the video with the videographer and verified that it seemed real, they paid $250 (which Fowler explains is similar to the standard freelance photographer rate) and brought the footage back to the station, “so that the rest of the news staff could see it and evaluate if it could be used — and if so, how to include it in her report.”

It was at this point, after the newsroom witnessed the graphic nature of the video, that the station began a conversation about whether or not to air the video. They considered the photographer’s motives. “Instead of coming to direct aid of Albert or even calling 911, he shot video at shockingly close range, without apparent regard for Albert’s life or for his own, for that matter,” Fowler writes. But the videographer claimed that he had shot the video while picking up his sister from school and explained to Hill that, “he grabbed his camera and starting recording because the fight was, sadly, not that unusual,” Fowler explains. “He wanted to document the violence his sister and others had to endure just to walk to and from school.”

The station also had to consider how the video, if aired, would affect Albert’s family. And Fowler explains that the station felt a responsibility to contact the police, who could possibly use the tape for investigative purposes, as it showed the faces of many of the fight’s participants. WFLD-TV complied with Chicago police chief of detectives, Thomas Byrne’s request to withold airing the tape so as not to interfere with the investigation — which the station did for 24 hours. But Fowler’s explanation places these considerations, for the investigation and Albert’s family, after the station had already decided to air and post online “an edited and shortened version of the video.”

Fowler goes on to explain the editing process and the effects of airing the video. In addition to aiding police, who arrested three teens seen on the video the weekend following the beating and a fourth the following Monday, the footage caught the White House’s attention. According to Fowler, “Five-hundred thousand dollars in federal funds has been dedicated to giving students at Fenger constructive after-school alternatives…”

Writing for Poynter Online, Poynter faculty member Al Tompkins interviewed Fowler after her October 19 article was printed. Fowler answers questions about the decision to pay the videographer and the editing process. When asked why she wrote her ariticle, Fowler explained, “There has been so much interest in the video that I thought others in the news business could benefit from knowing how we handled the story. It was a deliberate and careful process.”

Tompkins applauds her transparency, writing “Whether or not you agree with the station’s decision to purchase the video, air it, withhold it or cooperate with police, Fowler’s essay and availability to answer questions about how her station responded builds credibility.”

But Fowler’s essay was posted more than three weeks after the beating and the original broadcast featuring the video. And she makes no mention in her article about the public’s response to the broadcast, which is implied in her response to Tompkin’s question. Obviously, people were talking about the video — and the ethics of airing it (see this discussion on NPR’s September 30, 2009 episode of Tell Me More). What else would have prompted Fowler to write her article? She should have directly addressed the public’s reaction to the video.

WFLD-TV seems to have handled the situation with care and thoughtfulness, providing ample warning in the broadcast about the nature of the footage and taking pains to avoid sensationalist coverage. Other stations didn’t do as well, particularly CNN. In a story featuring the video, instead of a somber warning, the link to the footage entices readers to “Watch graphic video of the attack.”

Although WFLD-TV and Fowler deserve credit for both the editorial decision-making process before the initial broadcast and Fowler’s willingness to share that process openly, they could have benefitted from a bit more expediency when responding to public reactions about the story.